I had absolutely no idea what to expect in terms of crowds or entry process at Shanghai Disneyland, there really aren’t that many blogs, trip reports on the subject, there will be I’m sure, there just wasn’t much before our trip to go off. With this in mind I decided to get up at the crack of dawn and get there as early as possible just in case. So at 6.30 we set off to the bus stop, where surprisingly a bus was already waiting! Judging by the amount of people on the bus we were not part of the “bulk” of arrivals, were we late/early? I started to stress.

We finally arrived and again there were only a few people milling around the area and on arriving at the entrance, which was cordoned off into a series of lines with barriers we saw only a few people queuing up.

Weatherise it was pretty grim, grey and lightly spitting like it had been the night before. We weren’t put off by this though, we’ve done Florida in thunderstorms before so this was nothing! It wasn’t that cold either so we put the brollies up and prepared to wait for the next hour until the gates opened.

Gradually it started to get busier and I would say that by 7:00 the queue was at a peak. They were pushing everyone further into the holding areas to avoid clogging the walkways. Which on a normal day would have been fine but when everyone has umbrellas up and your 1/2 feet taller than most people there you are going to loose an eye if you’re not careful. 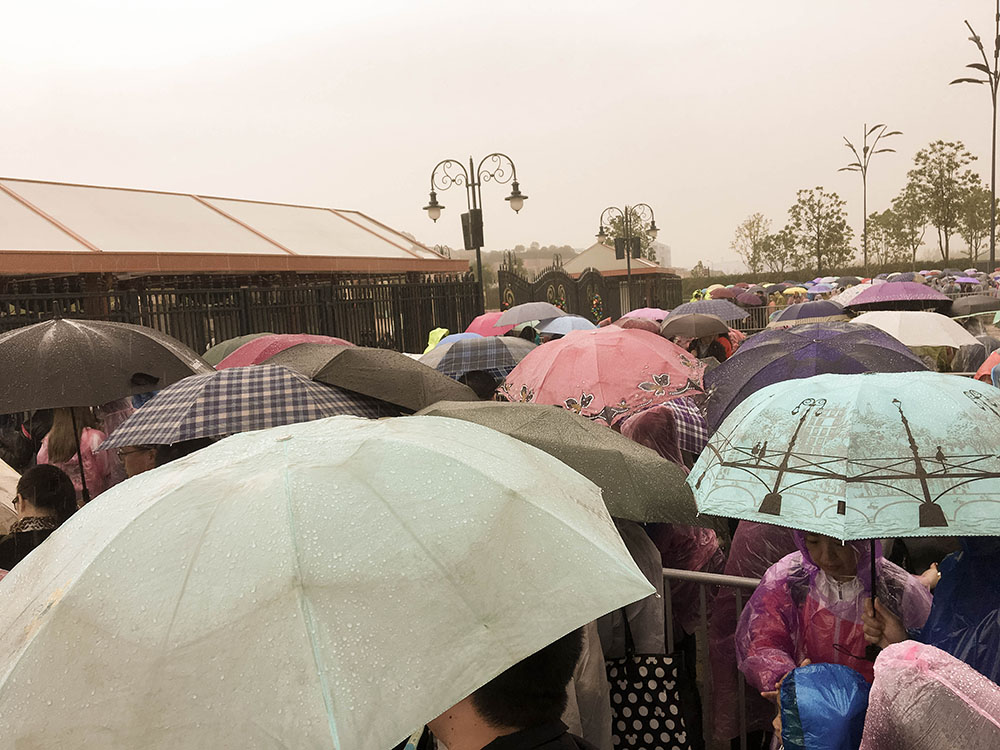 At 7.15 the heavens opened, it POURED it down. As we were under brollies we stayed relatively dry but we did then have to contend with the run off from everyone elses so things got to be a little soggy. 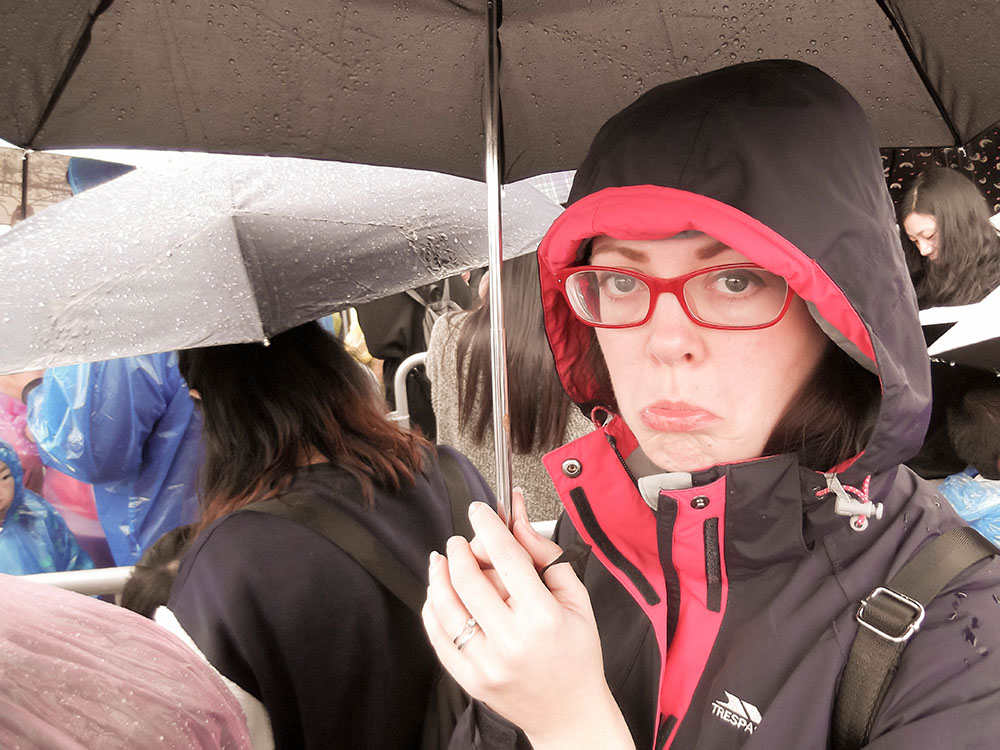 Thankfully the rain stopped almost as soon as it had started and went back to light drizzle, it was then that the gates were opened….

Now I expected a free for all, pushing/shoving, the works. But instead two cast members stood on each side of the line and ushered guests forward one at a time to go through the metal detector and get our bags checked, very civilised!

You’re then in no mans land between security and the main gates, you could grab a coffee here if you wished or you could do what a majority of people were doing, including ourselves, which was a quick sprint to the next lot of queues. These again were numerous and we ended up second in line, NAILED IT! , but within 5 minutes the queues behind us started to build. 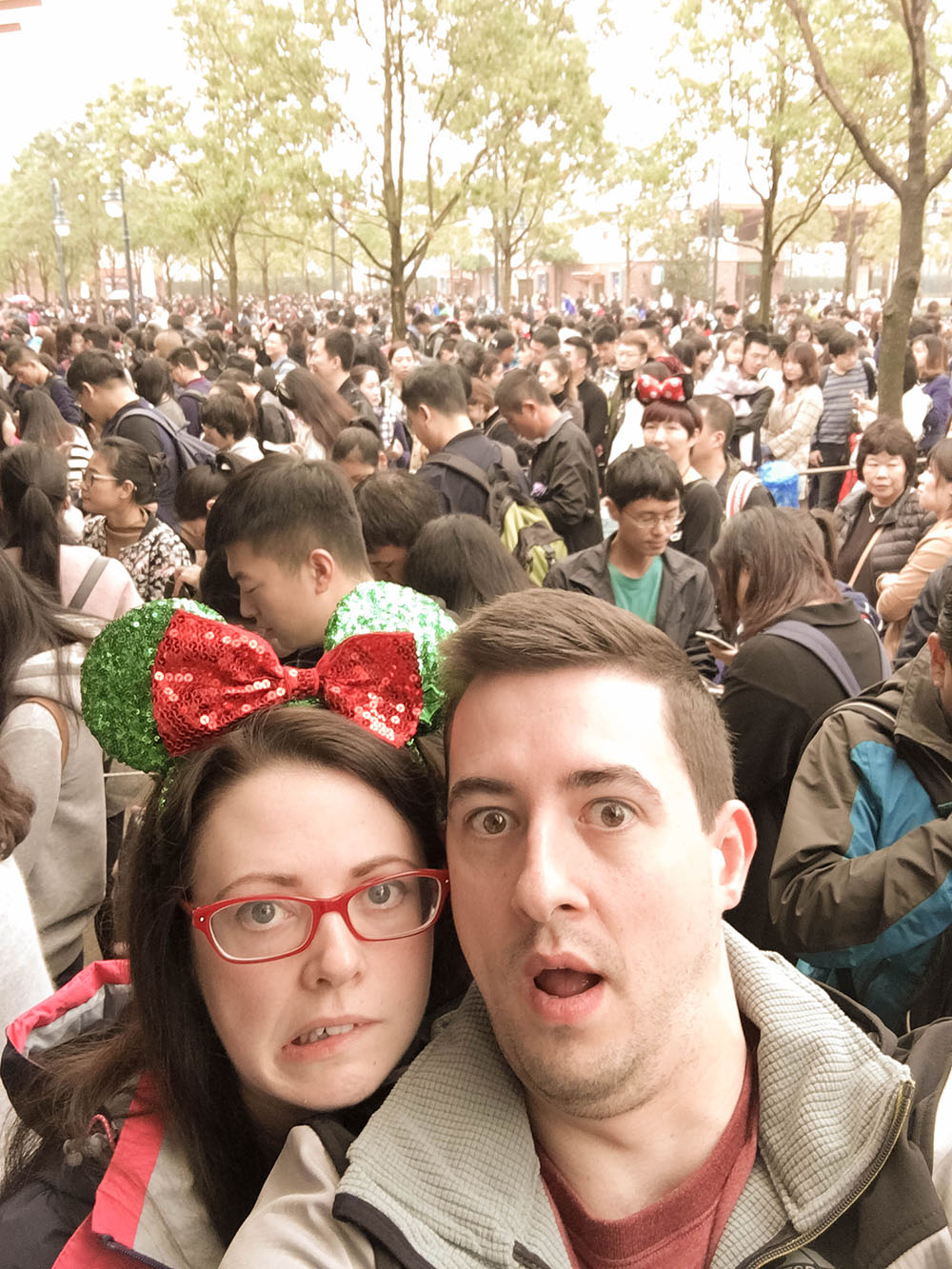 Now as this point I want to mention Shanghai queuing horror stories. We’d read them: pushing, shoving, queuing jumping, no personal space. So we spread out. The group behind us did keep edging forward and tried to fill “around” us but at no point did it feel they were pushing in or invading our personal space.

Those around us all had id cards, I started to panic that perhaps I needed our passports… those passports safely locked in the safe at the hotel…. eek! (I didn’t)

Just before 8 they opened the gates. There were no cast members to hold the masses back, but nobody moved. As soon as the cast members manning the turn stiles ushered the first guests forward though everyone surged in. No more mental than getting into a florida park though.

Once through, we moved! The plan today was to head left to Tron first, since this was our main “Must Do’s”. My husband was under strict instructions not to stop to take any photos, I was expecting the usual mad dash, similar I guess to the ones seen at Toy Story Mania. Instead the “taking it all in” would be happening on day 2 once we’d experienced all the rides we wanted.

But it didn’t happen.

We stopped. We stared.

The entire mass of runners were heading right towards soarin, only ourselves and a few others were heading elsewhere. I could’t believe it! And we stopped to take it all in instead, agreeing to leg it if any large groups starting heading our way. 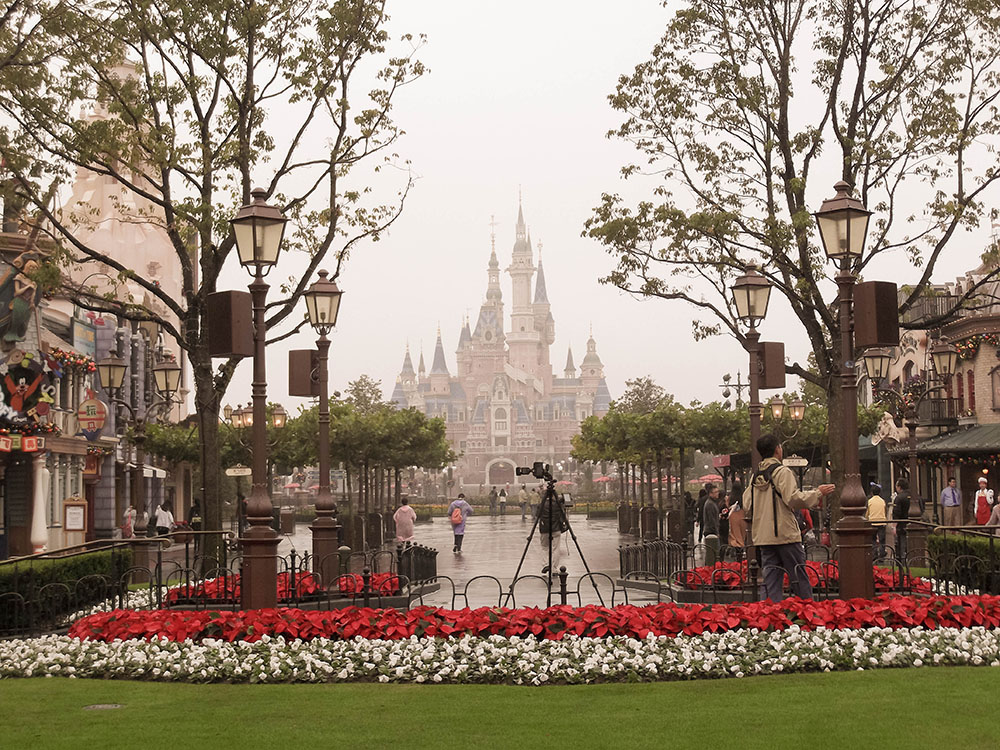 The hoards never arrived and we made our leisurely way towards Tron which unsurprisingly had a 5 minute wait. 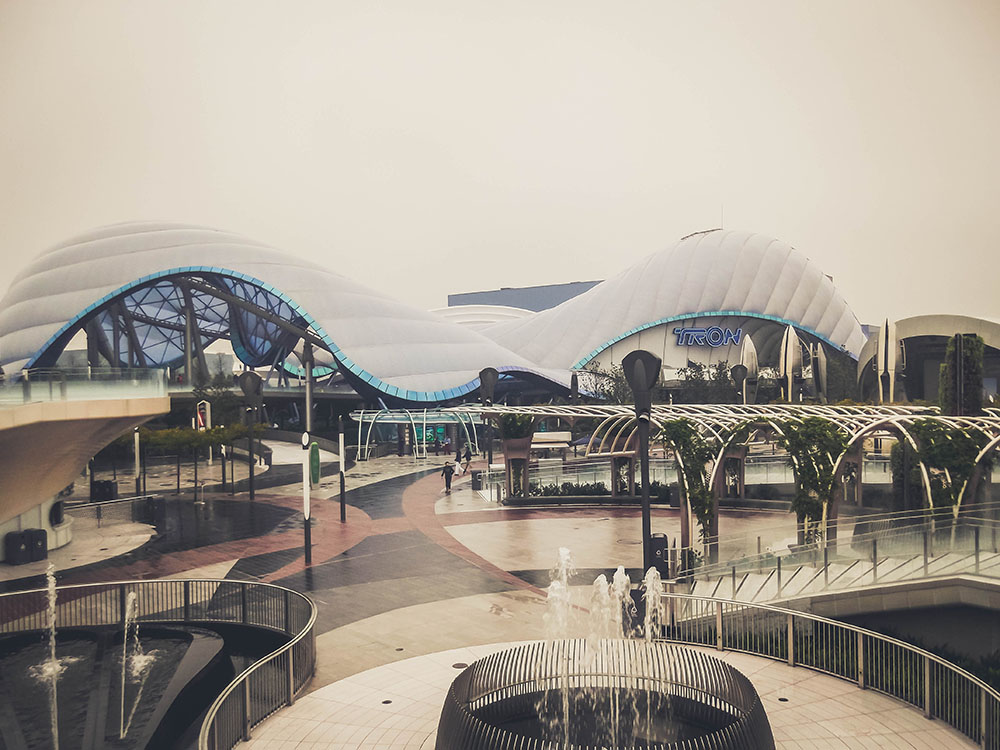 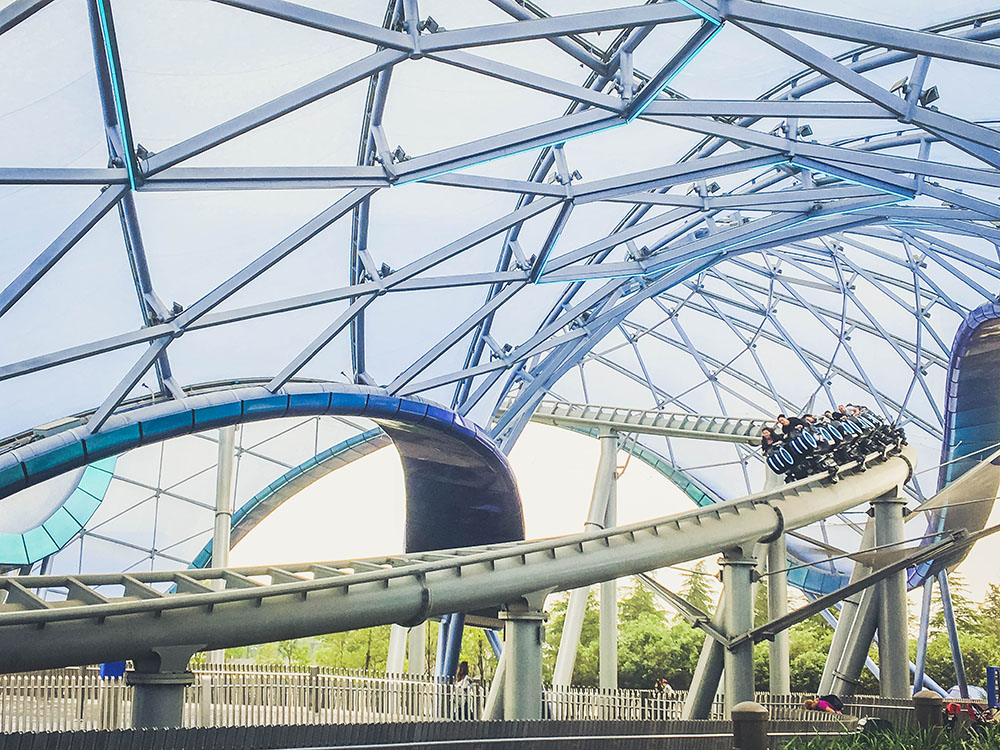 You have to use a locker for Tron, and they are VERY strict. I even had to take my headband off once on the ride! but rather ingeniously they give you a receipt with your locker number on it. Handy since you open the lockers at the locker not the computer screen which is very helpful when it comes to exiting. 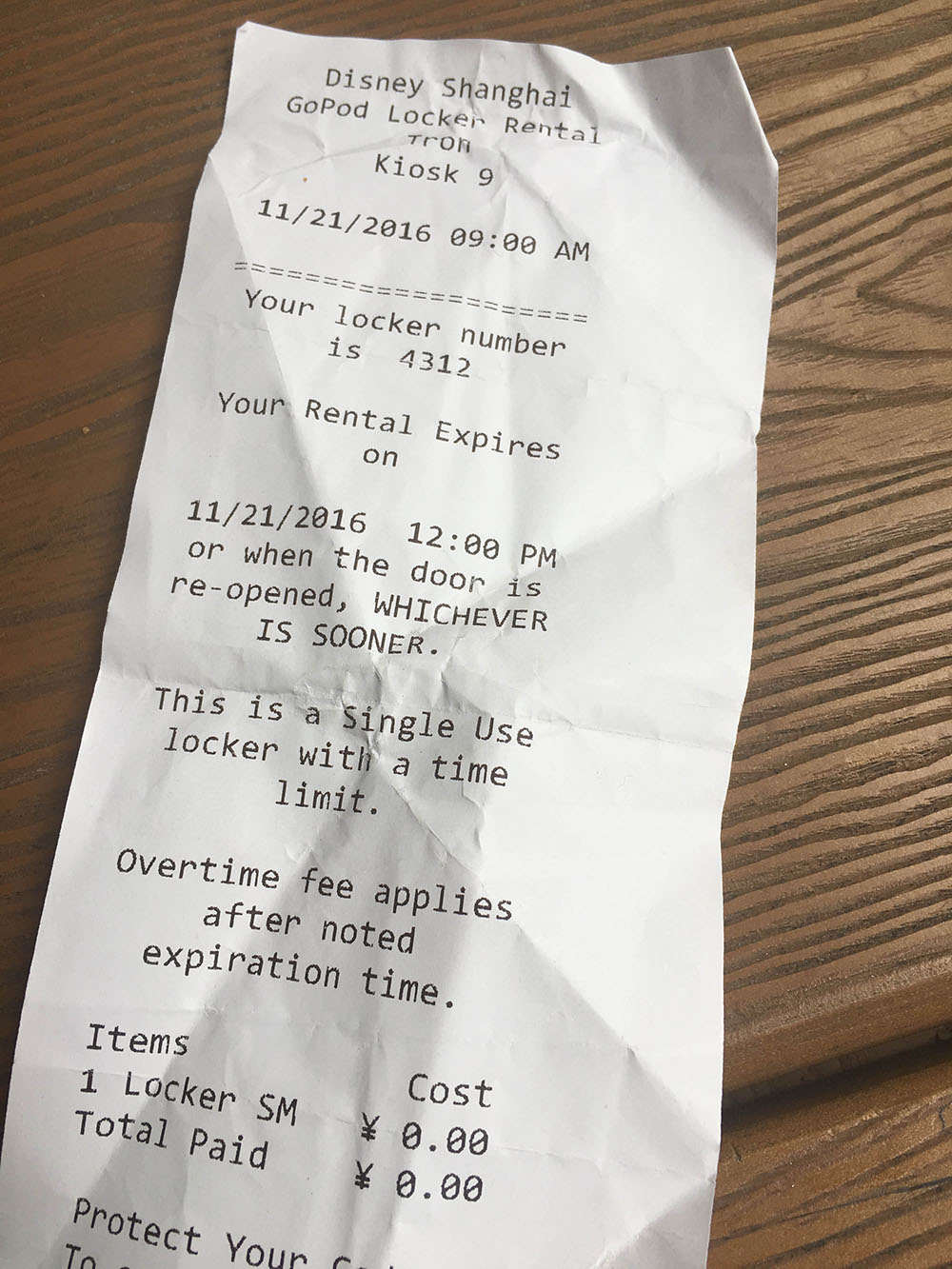 We were both really excited for this ride. We’d deliberately not looked at any descriptions or videos of the ride, preferring a surprise. The only thing I’d read was that it was “like test track”

I’m not going to cover the rides in blow by blow detail, you should have a surprise as well, stop reading now if you want to know nothing…. 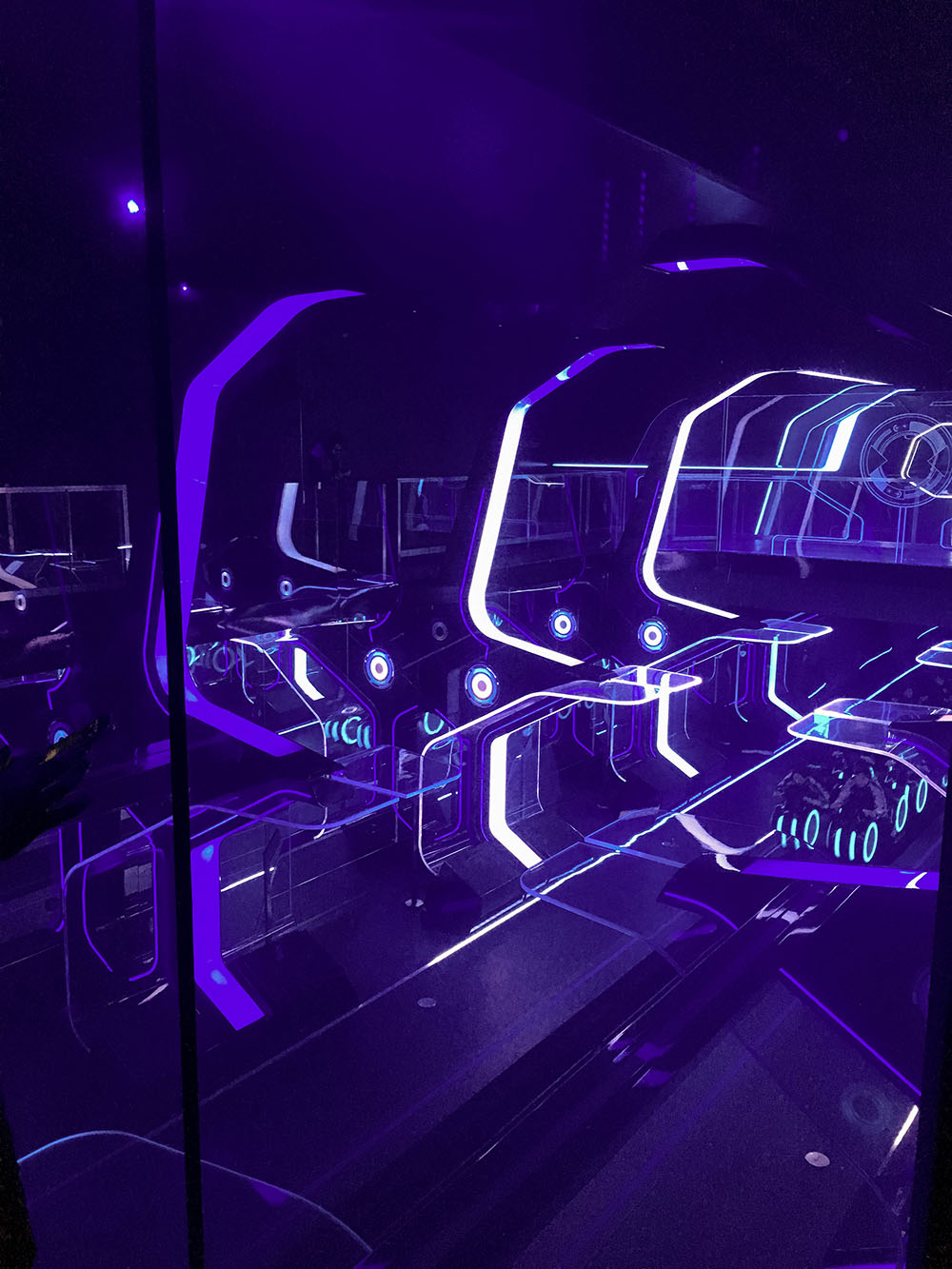 Firstly I will say, is it’s NOTHING like test track. The opening track, the sponsorship and the fact you get spat out into a gaming zone with cars is were that similarity starts and ends! I would say it reminded me of the mummy at universal above anything else. The seating is obviously completely different though. If universal don’t look at this ride and start to think how they can turn a bike into a broom and the race into quidditch I will be VERY surprised!

We both LOVED it! And as the locker was ours for the next 3 hours we headed straight back on… 4 TIMES! It was so quiet it would be rude not to!

My plan had been to ride tron for a while before grabbing an evening fastpass and heading elsewhere. The problem was that fast passes weren’t going, they were still for 11am! I kept running down to the booth to check, but each time it didn’t move (NOTE: you don’t have to run about like a numpty like me, the return time is by the entrance sign… DOH!)

We wandered round next in the direction of our second must do, walking via the castle as it was at the opposite side of the park. 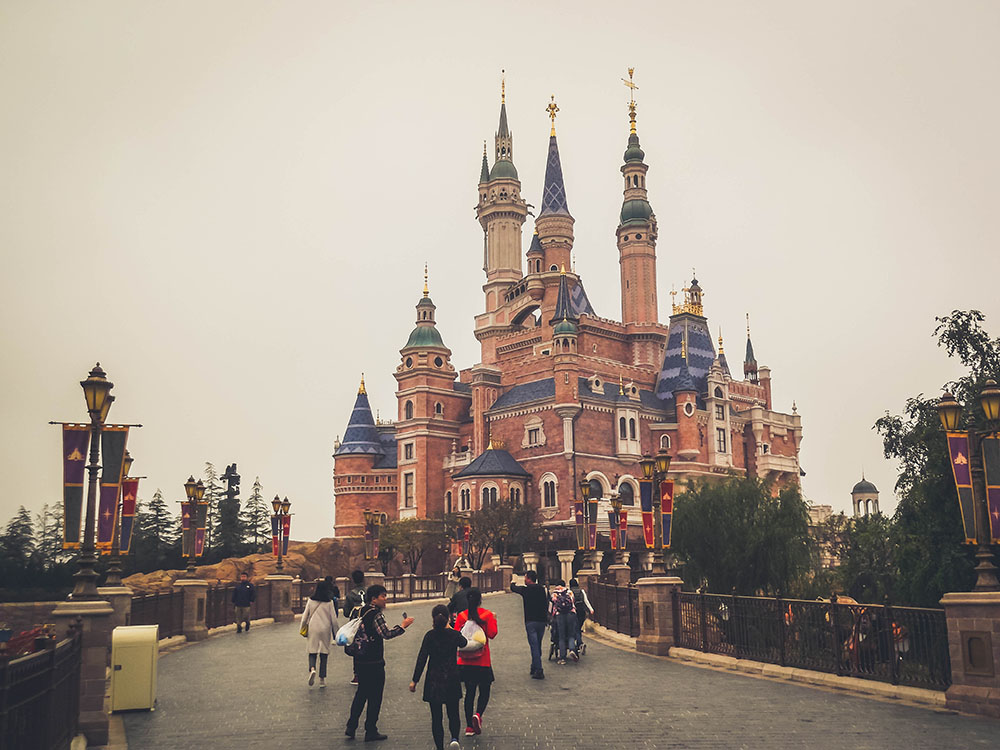 I had thought that the castle was far too big and that it would look “chunky” and out of place, but now we were here, it really didn’t!

Finally we reached our destination, Treasure Cove, or “Pirateland” as we ended up calling it as we could never remember! 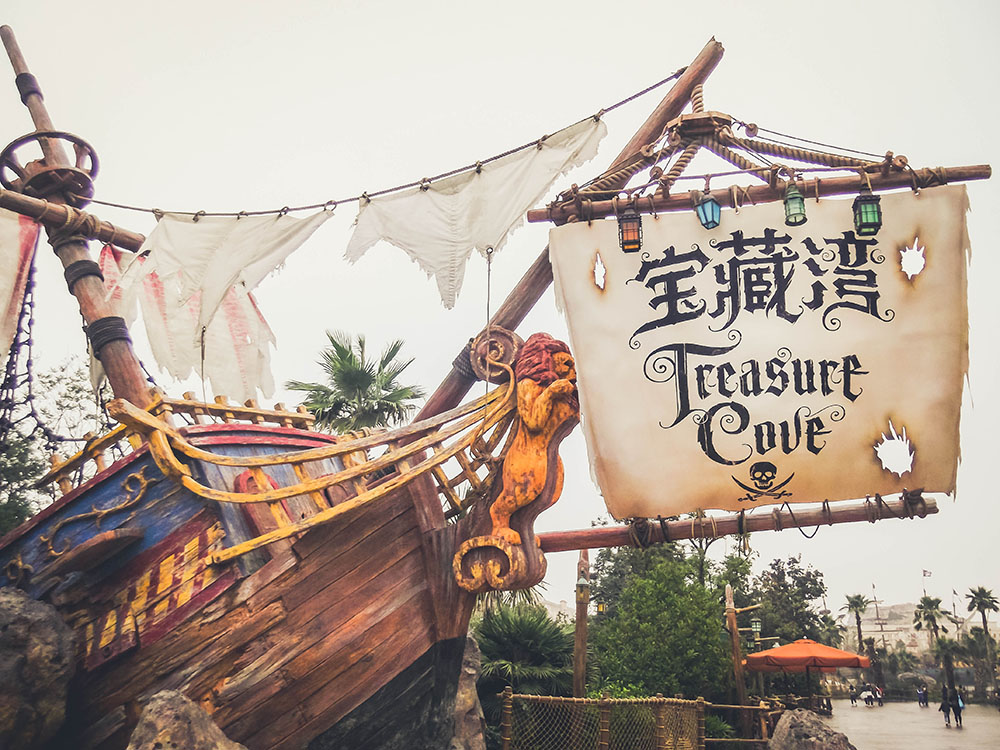 This area was amazing. Like they had taken all the best bits from all the disney parks adventurelands and made this EPIC expansion of it. We stood for a while and tried to take it all in, there’s was just so much DETAIL, everywhere you looked. 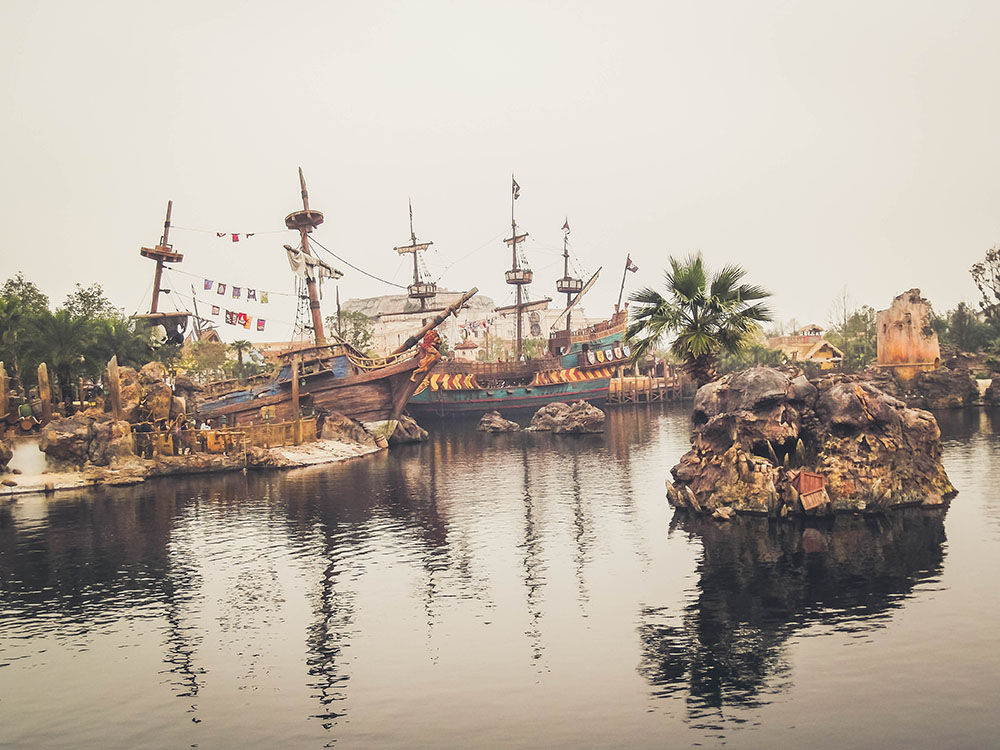 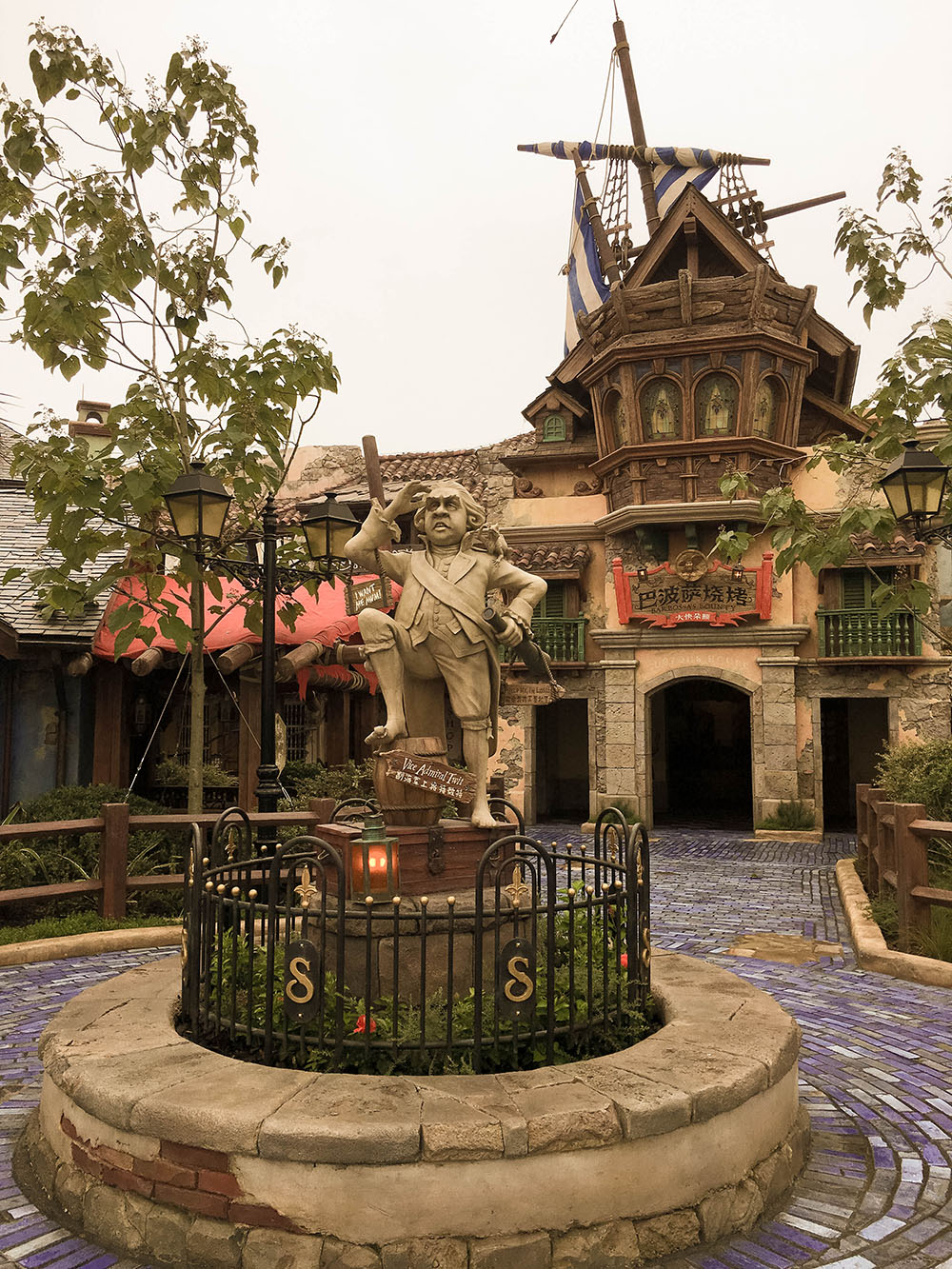 Pirates was a 10 minute wait so we joined the queue singing sea shanty’s on the way which earned us a smile from the cast members waving at the entrance.

Again I knew very little about this ride, even less than tron because you can’t “see” anything from the outside. 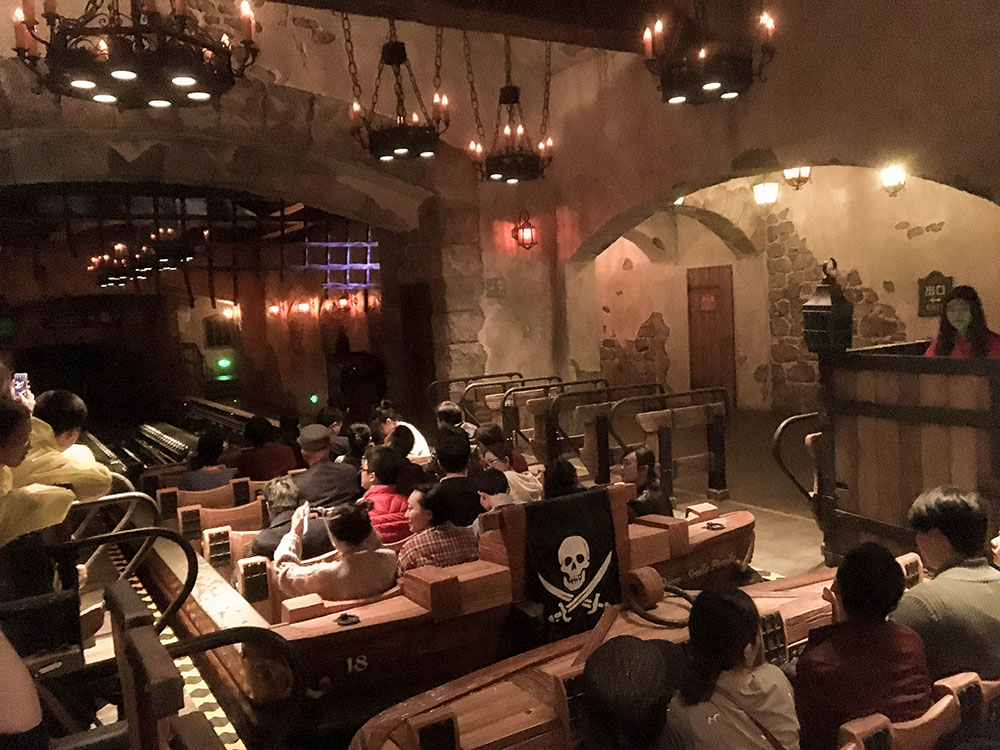 We both spent the whole ride open mouthed and at the end just looked at each other, both speechless, until we started to laugh, we were pretty giddy. This is by far the BEST ride I’ve ever been on. It’s not the fastest, the most thrilling, but overall the experience and sheer scale makes it bloody fantastic!

So good in fact, we rode it again!

We wandered next to fantasyland, as you can see, it’s still quiet. I don’t know what I was expecting but it was certainly busier than this. I’d prepared for the worst, hoping to be pleasantly surprised, but this was something else! 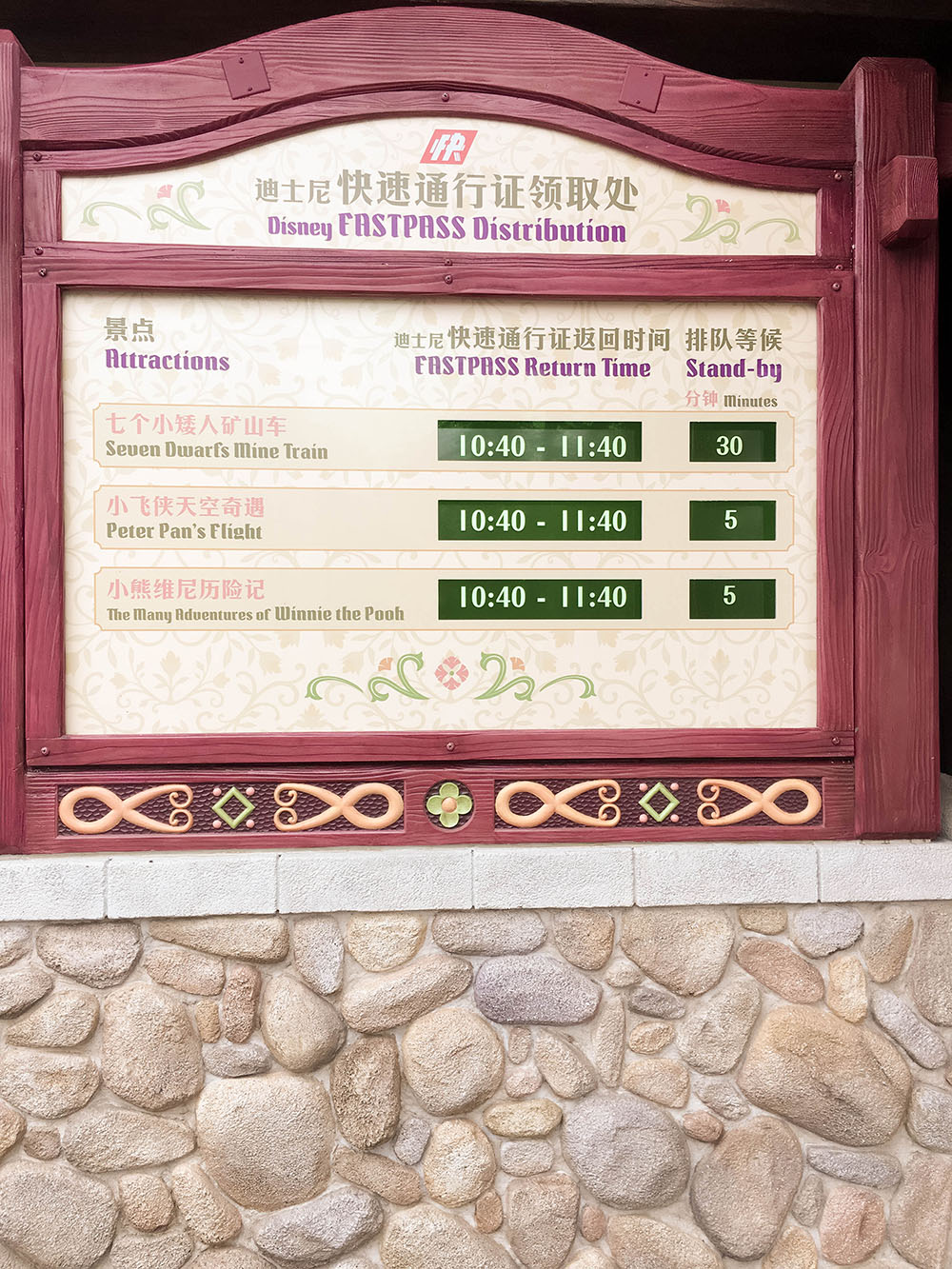 Our walk took us passed Adventure Isle where we stood and watched the rapids and the climbing area, this looked great fun! 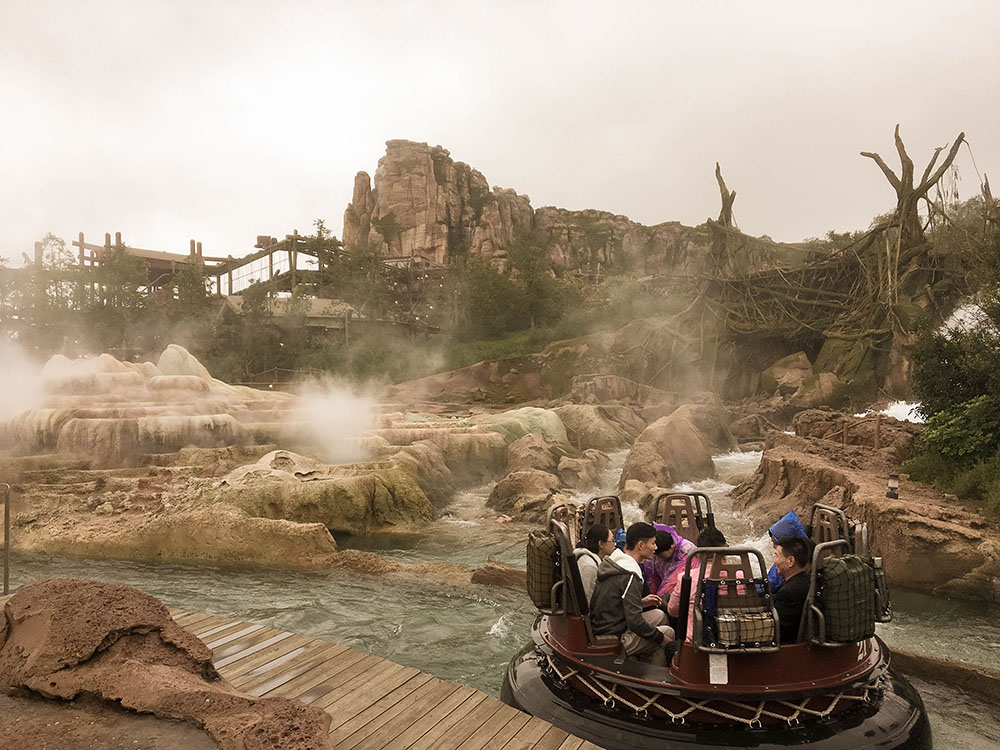 We didn’t ride anything here in fantasyland, it’s pretty much like every other fantasyland with nothing really different.

We did grab a fastpass for the mine train though as the wait was long and the fastpass time short. 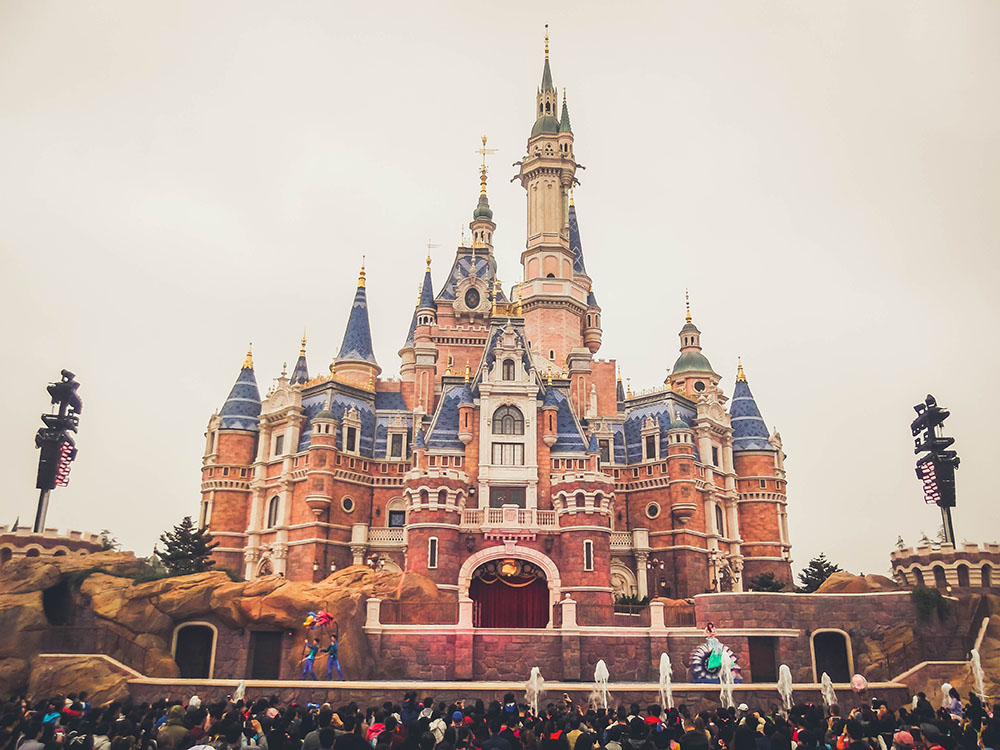 The show was rather good on the whole. Merida’s horse in particular. 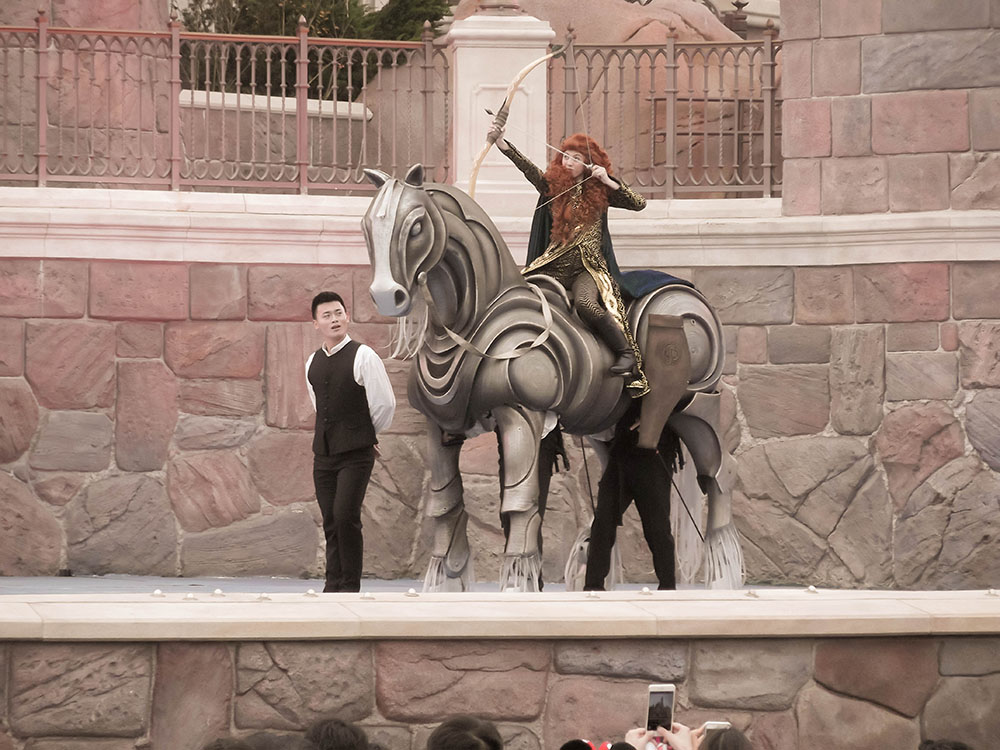 and the finale was fun to 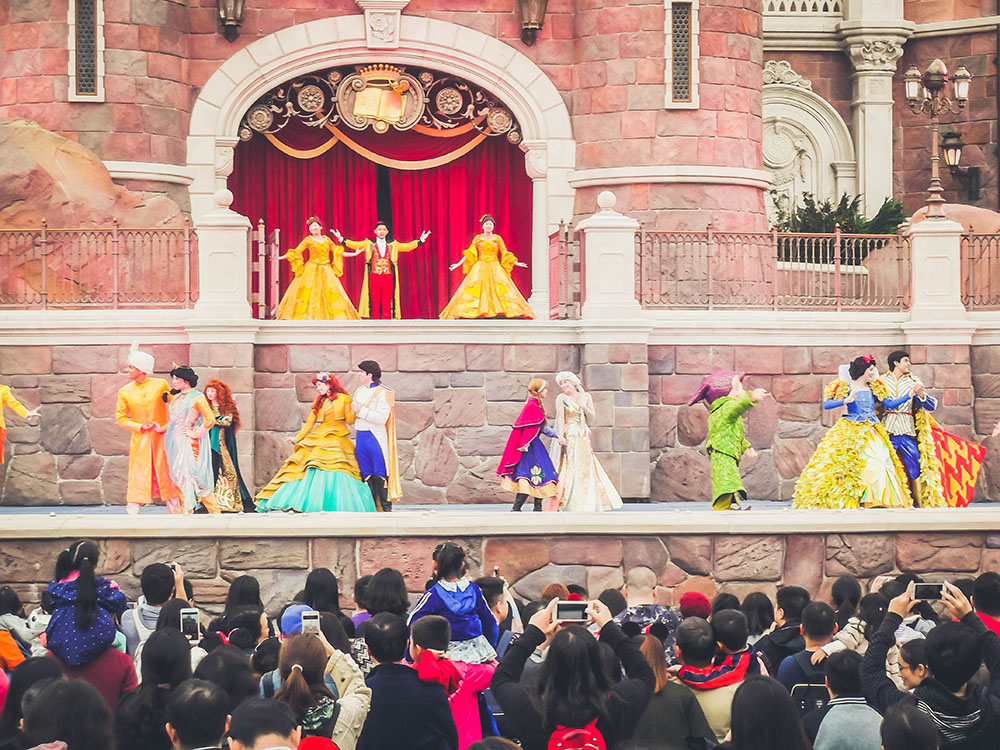 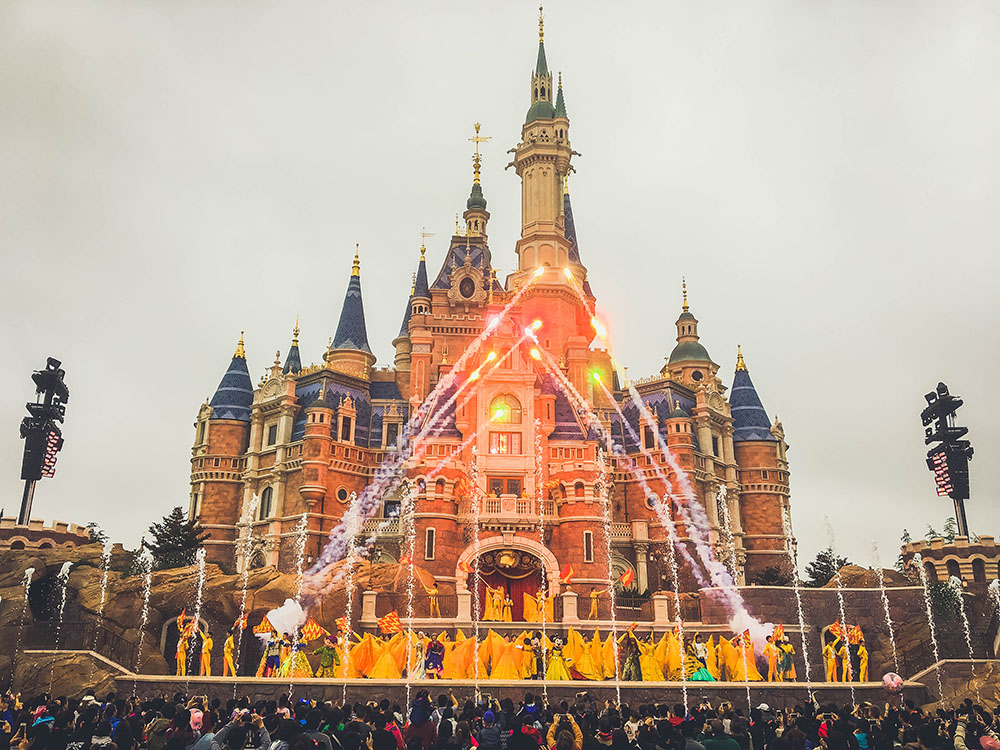 As we were in the area now we decided to head into the castle. 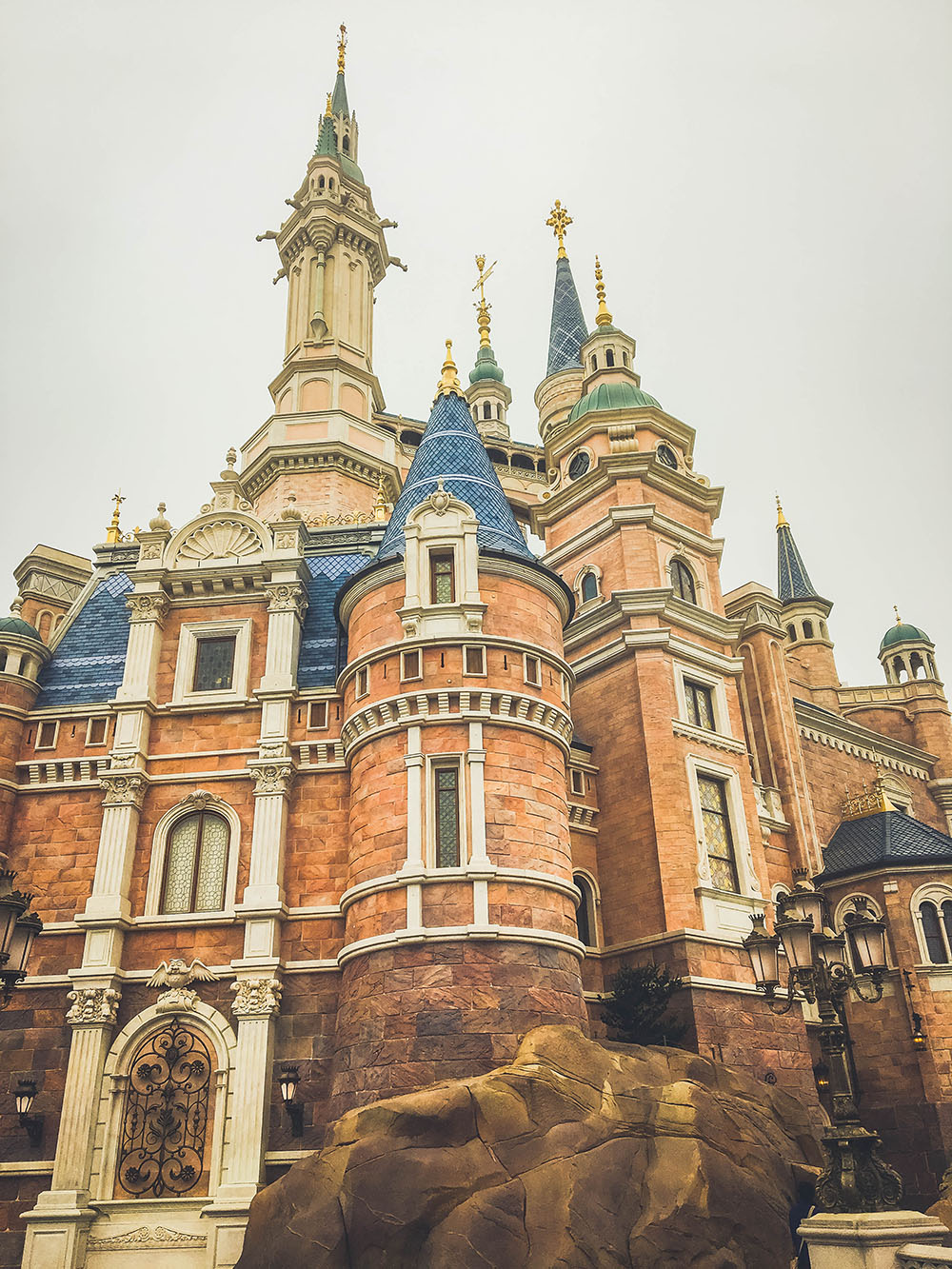 Now this really does have the wow factor. The “Rotunda” and then mosaics lining the wall were pretty special. 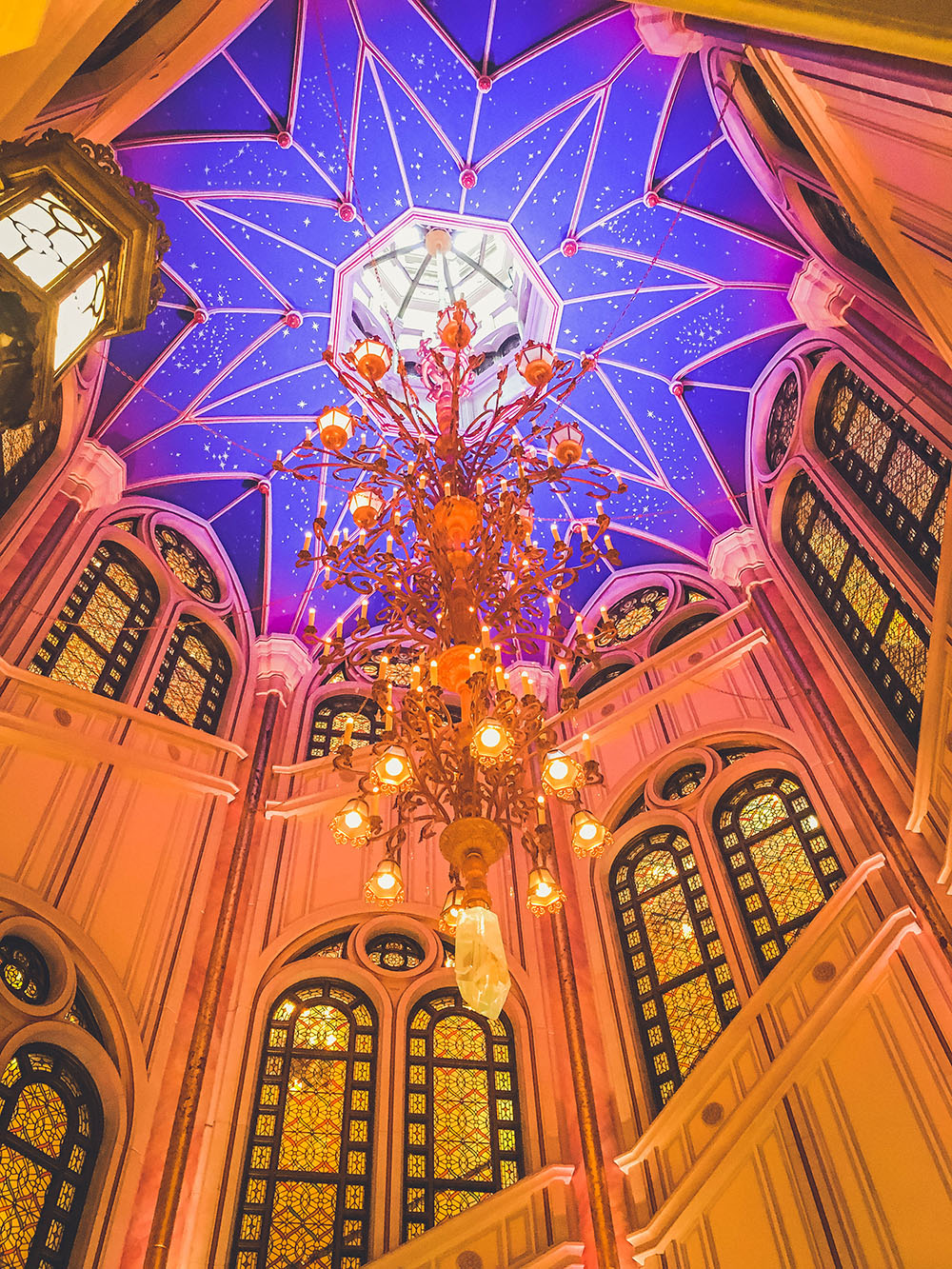 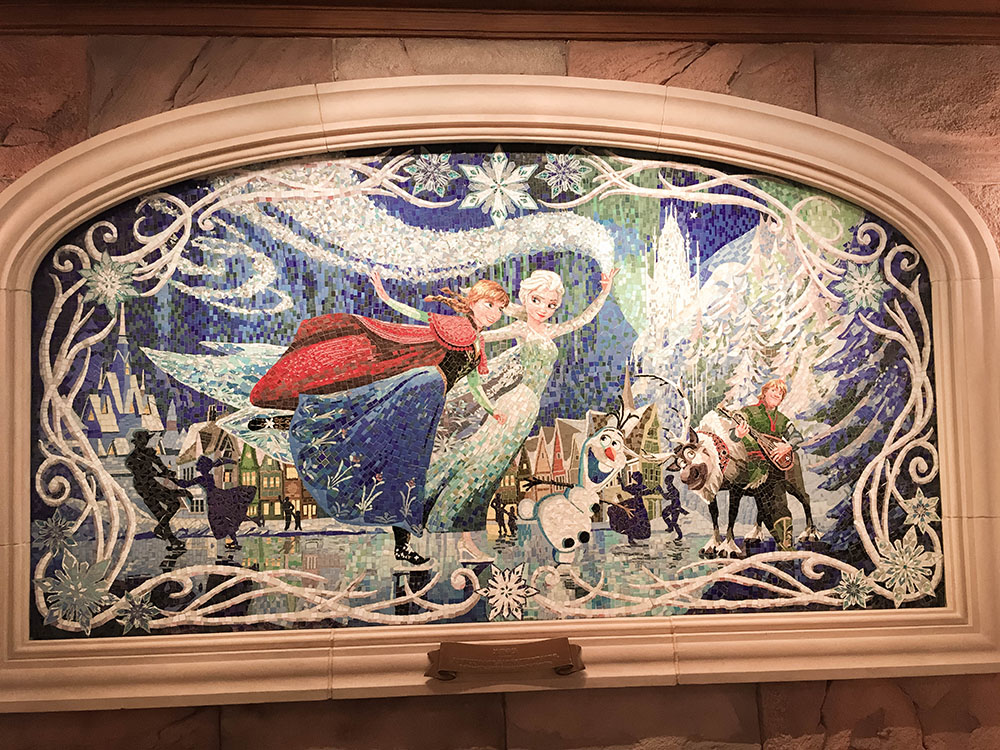 Next we headed into the castle instead. We got a little confused and started queueing to see the princesses outside before we realised our mistake.

Once we got in we headed up the stairs. Taking photos of each princess on the way. 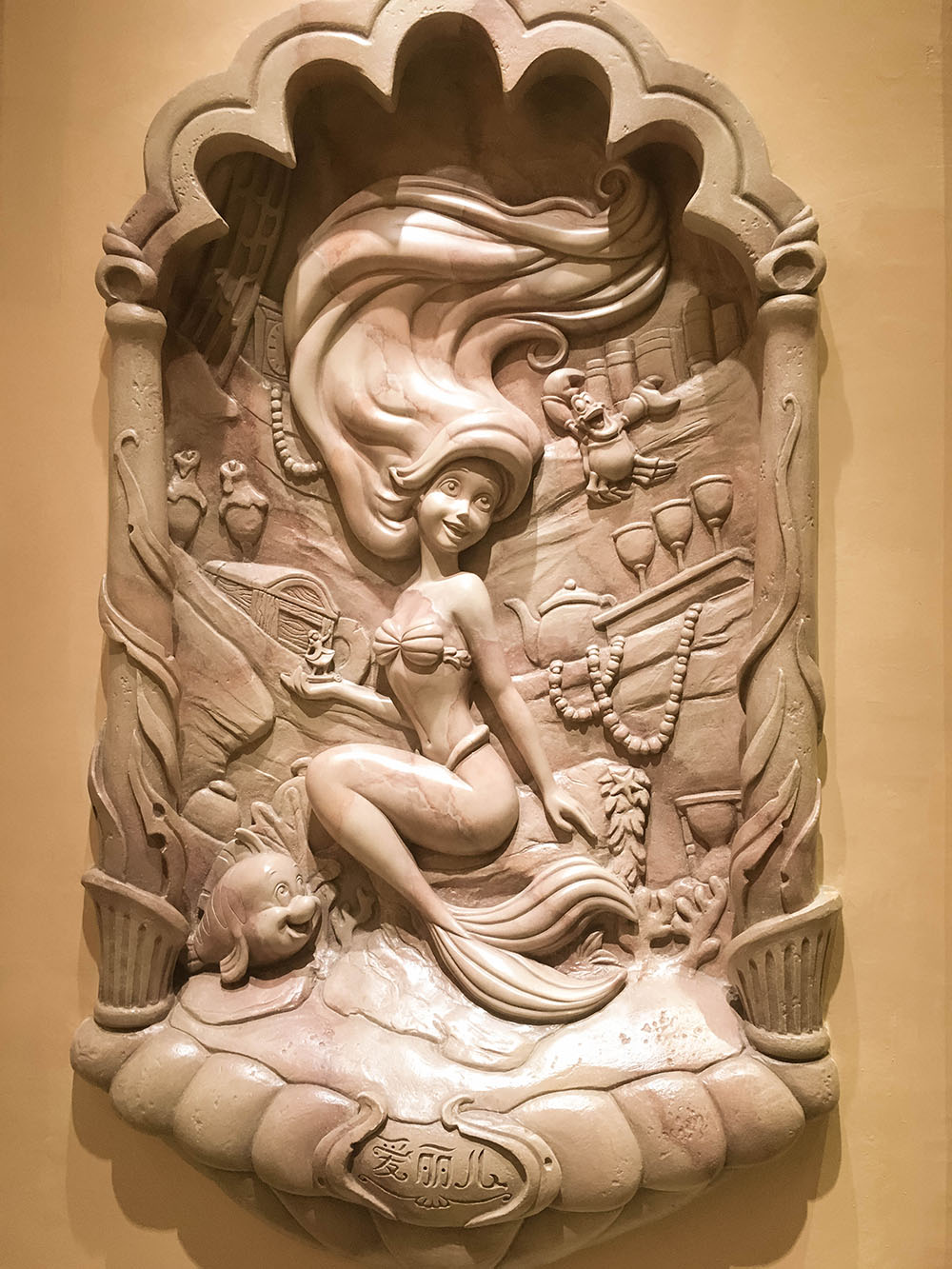 Once inside the top we walked through each of the various rooms. Be careful not to get ahead of yourself. The cast member starts you off at the right time but you may have to wait as each scene restarts, this seemed to confuse a few guests who clearly wandered through quickly and thought nothing was happening in some rooms. 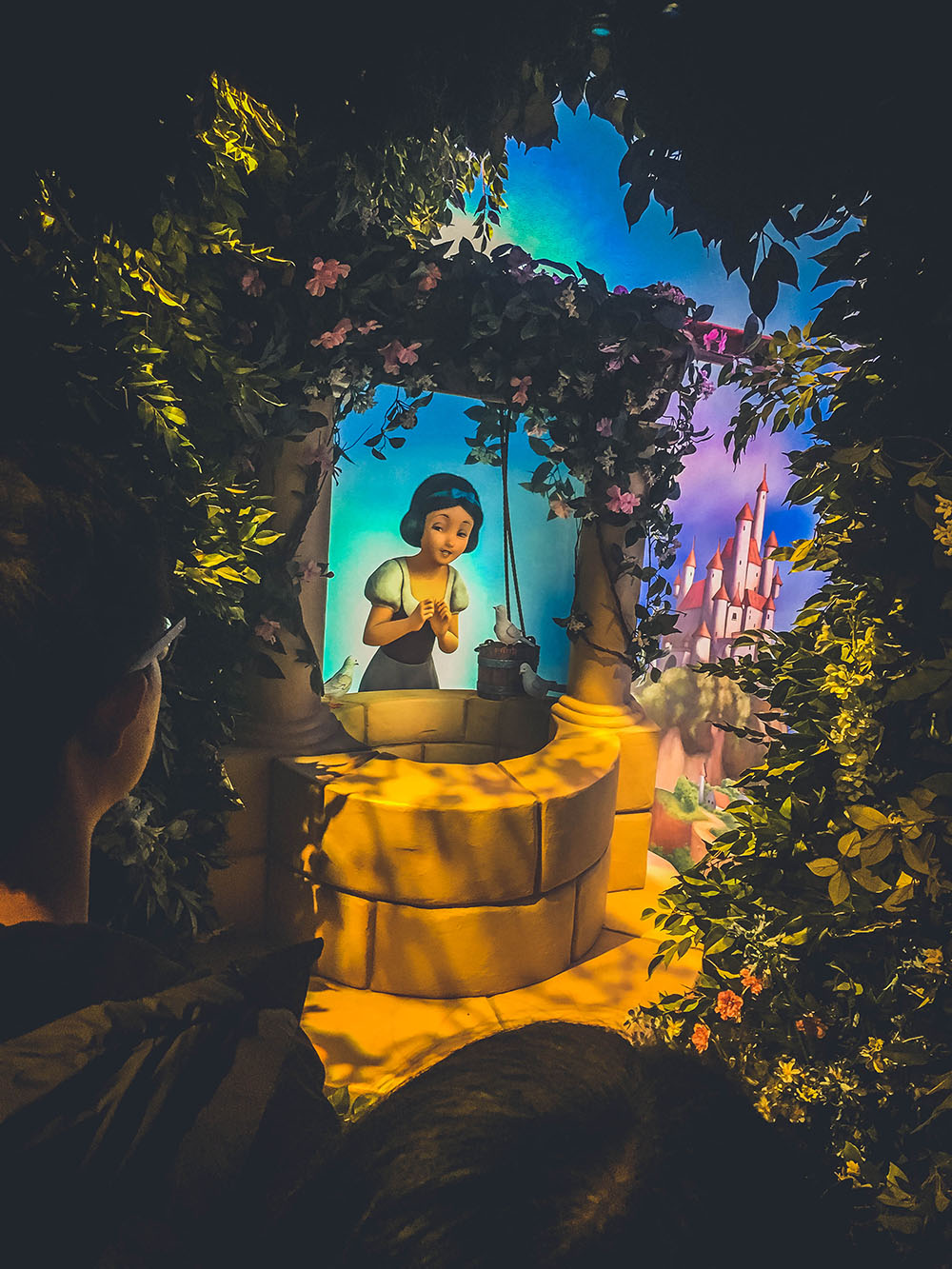 It was a cute walkthrough but it feels like a bit of a waste really, especially when snow white is the only princess shown (she’s a big favourite here so that’s probably why!).

Time had run away with us and our fastpass time had nearly run out (they seemed strict on it here, they really check your fp’s) so we ran over and joined the queue. This was a good queue jump and we were right at the front within about 3 minutes.

Not very much to say about this, exactly the same as Florida and just as underwhelming. I wasn’t complaining though, it was a massive draw for the crowds away from the rides we were more interested in 😛

Fastpass-less we headed to Adventure Isle to grab one for the rapids. At this point (around 12:30) every attraction still had fast passes with the exception of soarin.

By now we were getting a little peckish so we decided to grab lunch. I had first pick today and although I fancied dining in Treasure Cove I quite fancied the options at tangle tree tavern so we walked back towards Fantasyland. You’ll do LOTS of walking in this park. Everything is very spread out and if you’re going to make the most of fast passes there’s a lot of backwards and forwards to be done! 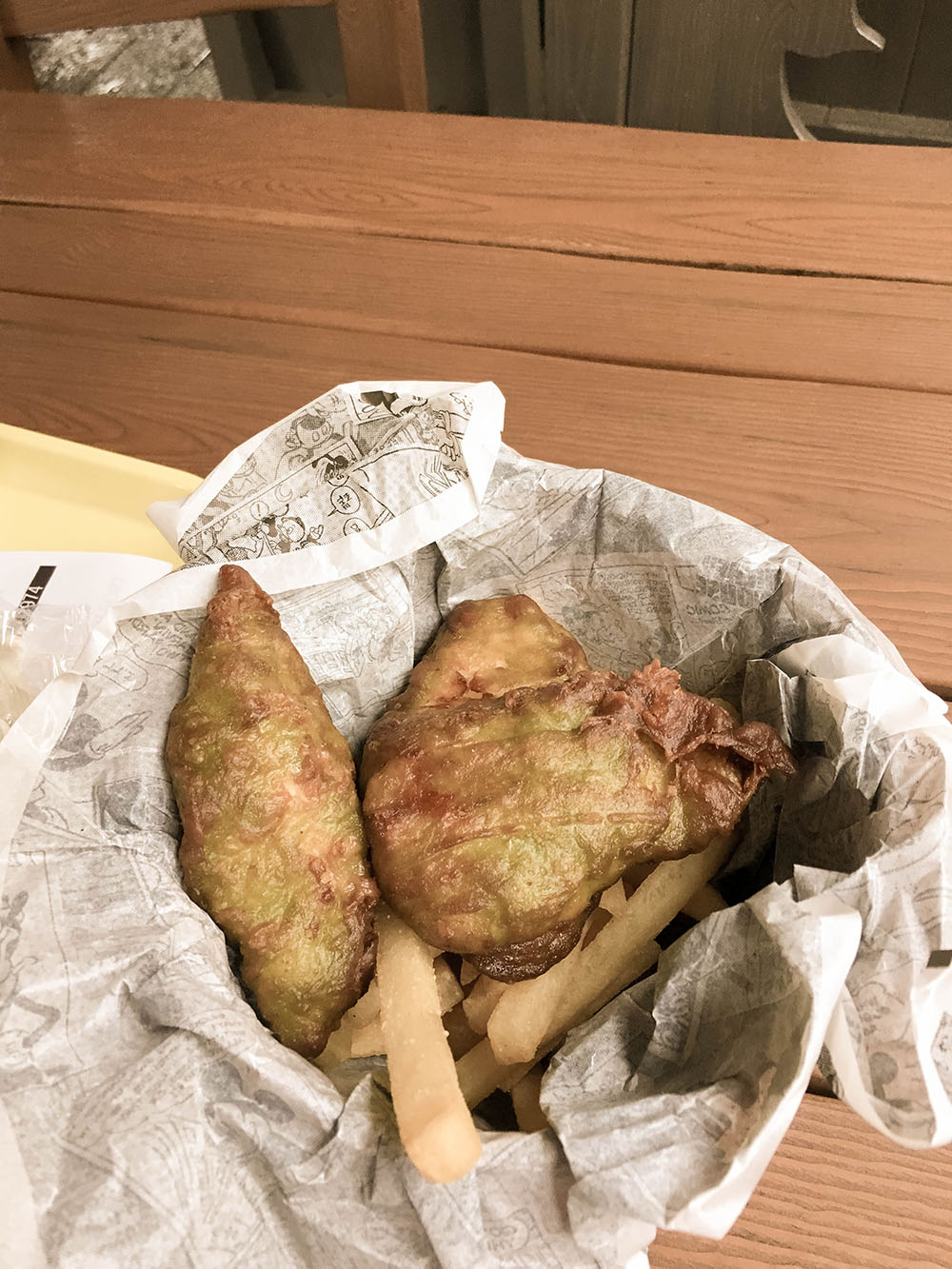 My husband went for the Sichuan Chicken (approx £9 with a drink). 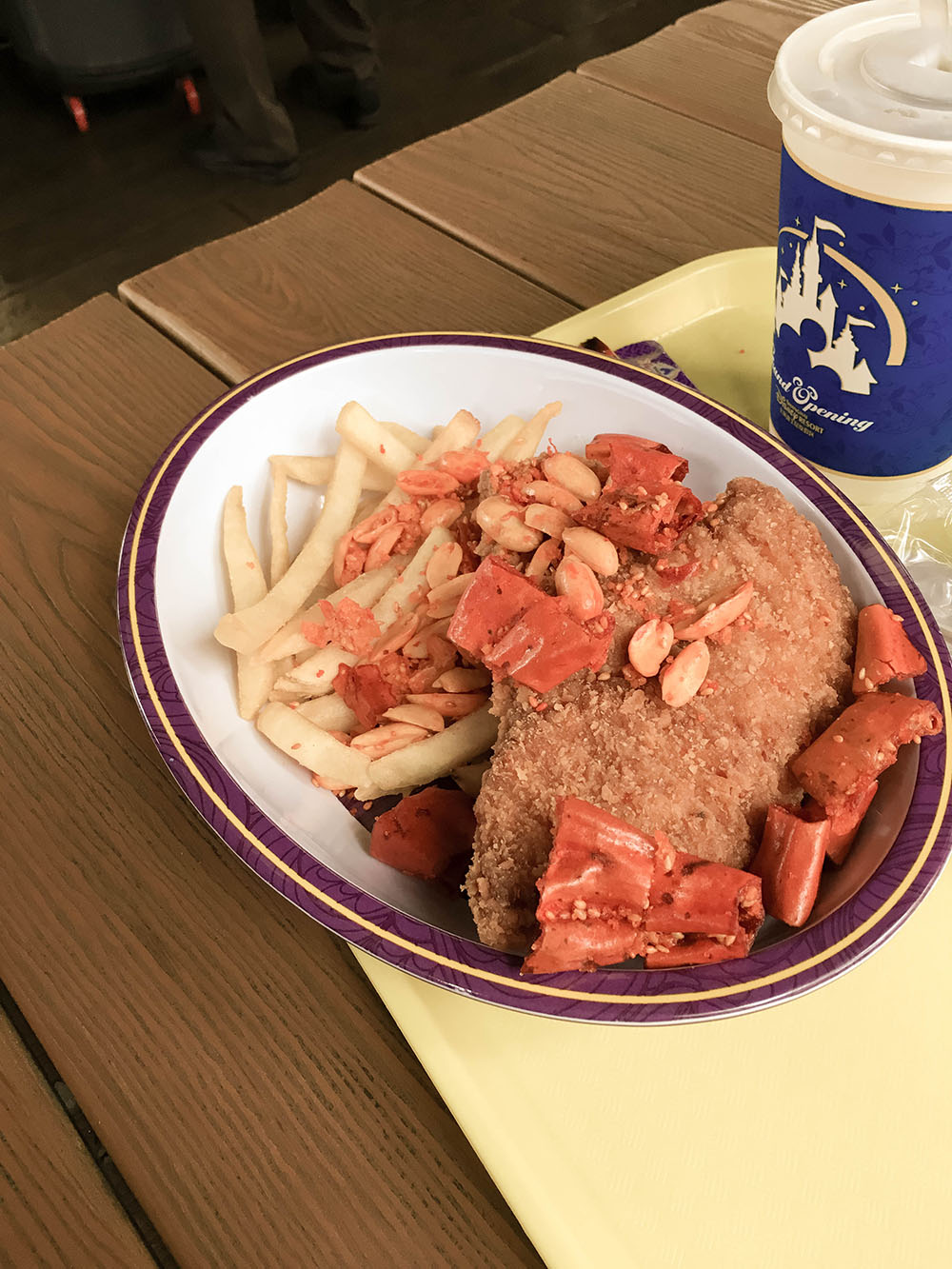 The place was packed so we headed outside to grab a seat. It was still damp but it was warm enough and under cover.

We both really enjoyed our meals and started to have hope that the food on this trip might not be all bad!