After lunch we headed back over to Adventure Isle. We went the long way around, grabbing a fast pass for tron again as we were within our time limit for the rapids.

The fastpass for the rapids worked out well as the sky was clearing a little and the rain had stopped.

Now I’m not a fan of water rides, unless it’s boiling hot and I know I’ll dry, otherwise the idea of being soggy for the rest of the day is not something I particularly enjoy.

As we queued I started to get a little nervous, as everyone was putting poncho’s on… it didn’t look THAT bad though….

As it turned out I only got a little damp. We ended up in a raft with a large group and only one member got particularly wet with an ill timed wave. We all had a good laugh, laughing at another’s misfortune breaks language barriers apparently.  Infact looking at other riders, those that were even a little bit damp were in the minority, bilge rat barges this was not!

Now I really fancied the idea of the climbing wall, it looked a bit tame but I was intrigued. 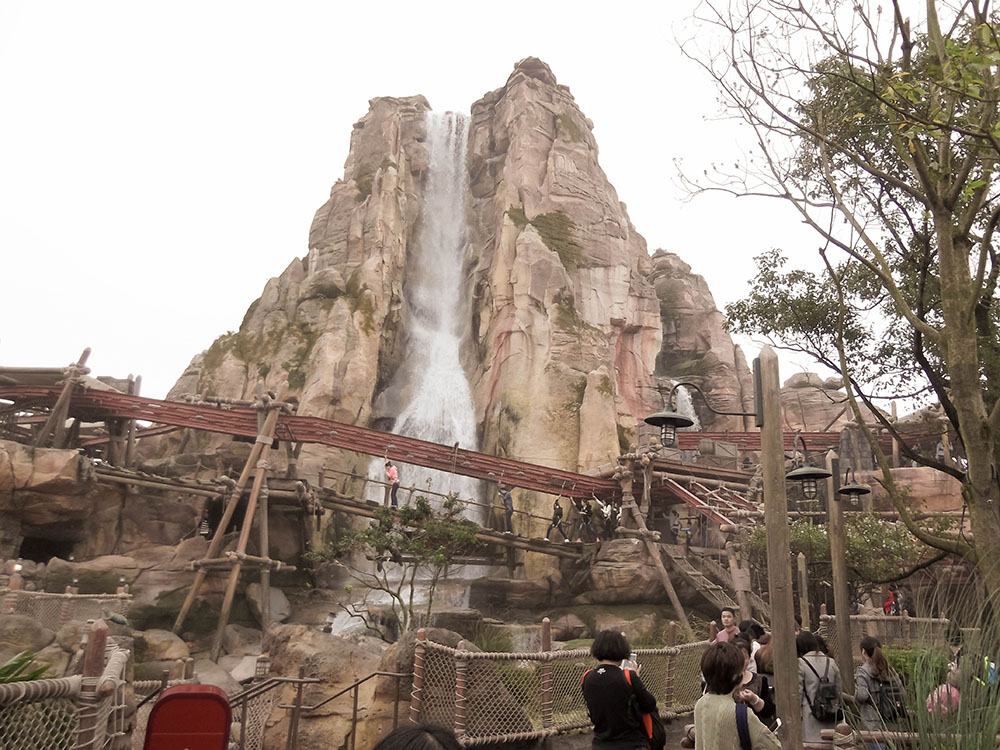 The wait was 20 minutes so we joined the queue. Again we had to pop everything in lockers and then join the queue. This really was a military operation and we were in awe of the organisation of it.

First you get given a harness, colour coded based on your size. Then at the next station you stand in front of a CM, legs akimbo whilst they reach around and between your legs and clip everything in (no, not my idea of dream job either!). Finally the next station attached the top guide rope and you’re off! Incredible!

Now the description of this attraction is:

A few people in front of us were in heels (I was in wedged boots) so I didn’t think I had anything too challenging to worry about, I was focusing on the “scenic” part of the description…

Yes, it is rather scenic at first. At each stage you have a choice of different “levels” of crossing, usually three, from easy; a normal bridge, to hard; widely spaced, wobbly rope bridge.

This was fine, we went with the hard one every time without much issue.

Then we got to the last bit… HOLY HELL!

My husband was a little bit behind me so I looked back so I could see his face when he saw what I’d clocked… And there it was, the same look of terror I was feeling! 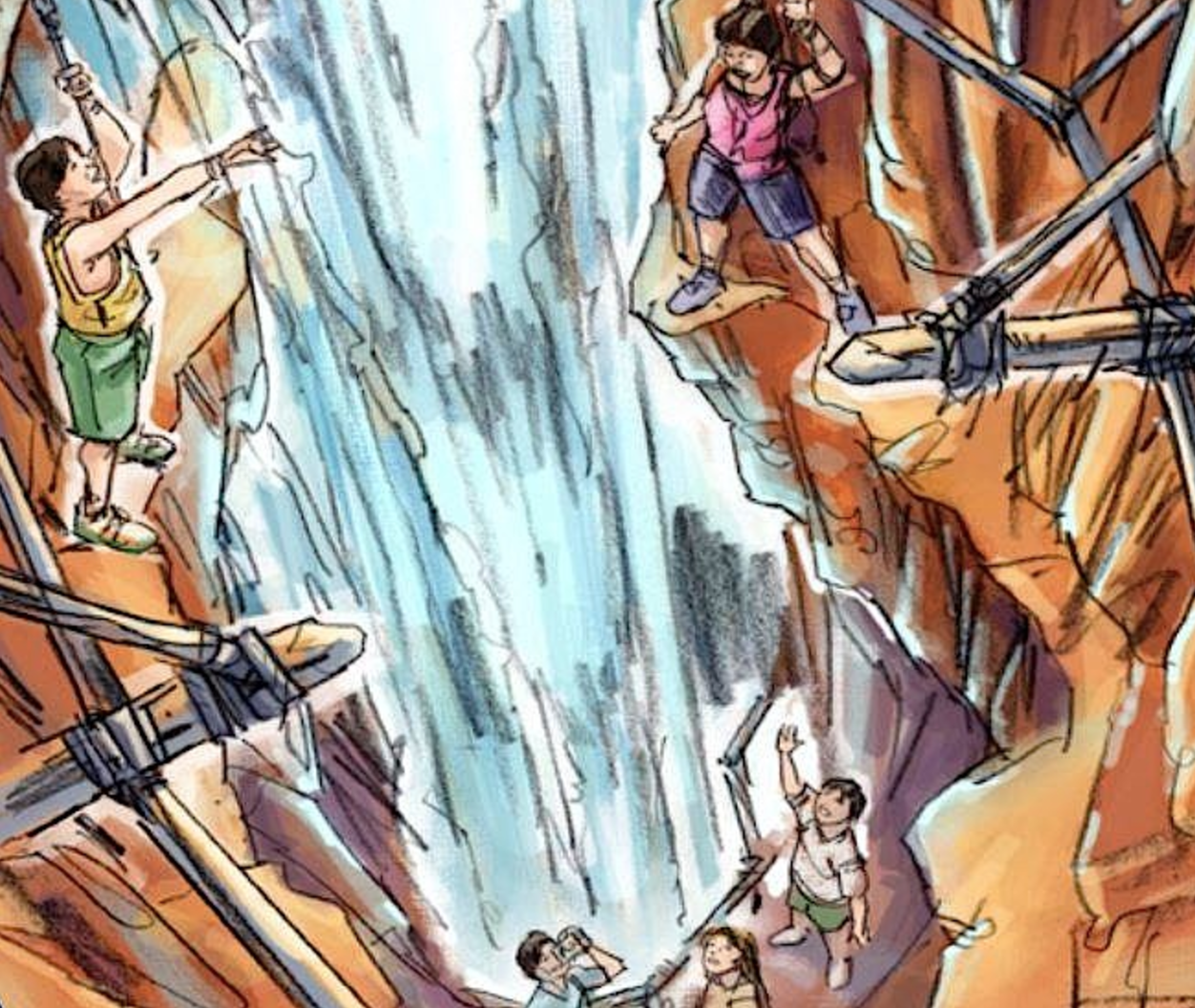 A big waterfall ran down the middle of a large drop, around the outside on both sides was a “ledge”. I quote mark that because on the concept art they look quite wide. In reality they were tiny… and wet.

I didn’t take a photo, I was too busy hanging on for my life.

I took a moment to compose myself before setting off. Holding onto the smooth rock face with my fingernails as best I could.

Halfway around the woman in front of me froze, and started shouting at her other half who was a little way in front. I’m not sure what she was saying but she was panicking and wobbling in her heels. Problem was, I was now stuck on a really narrow bit, trying to hold on. My husband was on the right side and that look a little wider, I’d obviously gone the “hard” way

Now I knew I was attached and safe. I could have swung across if I had wanted to, but at the time it was pretty terrifying, Go Ape has NOTHING on this.

If you want to see it there are some great videos online.

The woman’s other half came back and literally dragged her across and we both finally made it to the other side. Both a little wobbly on our feet. This was going down as the SCARIEST attraction I’ve ever been on… EVER! there was one final bridge to cross…. we took the easy one 😛

As we were a little wobbly, we decided to go and see what voyage to the crystal grotto was like. It wasn’t like anything we’d been on before, well maybe the storybook ride at DLP that’s often closed. I can see what small children get out of it though. 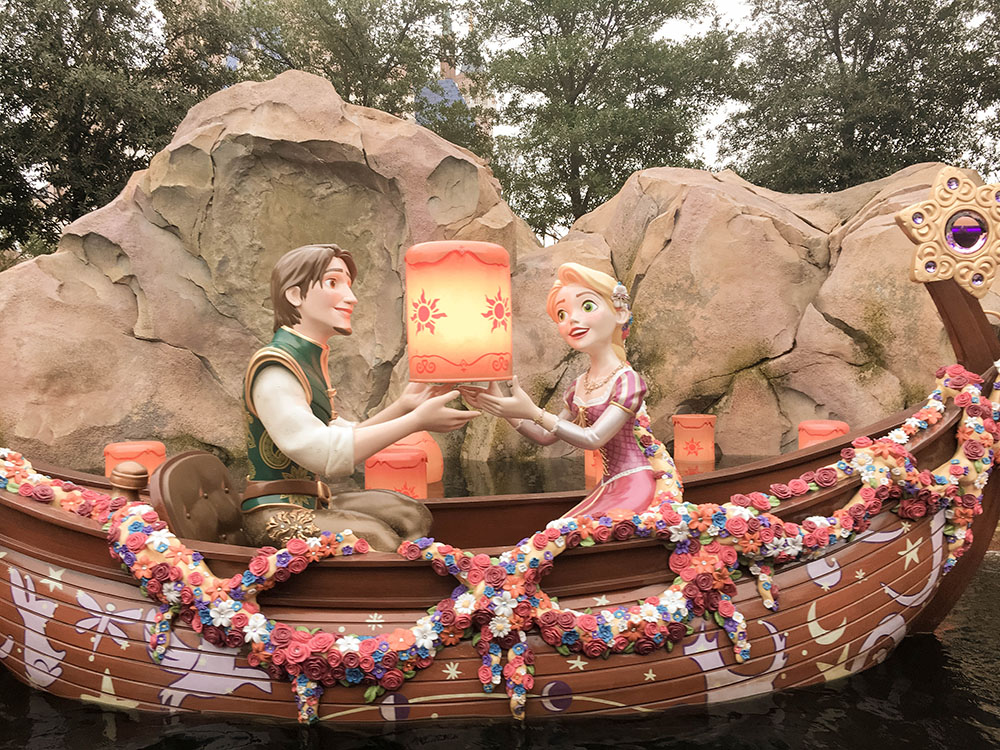 Finally we reached the entrance to the grotto… Hopefully this was gonna be good! 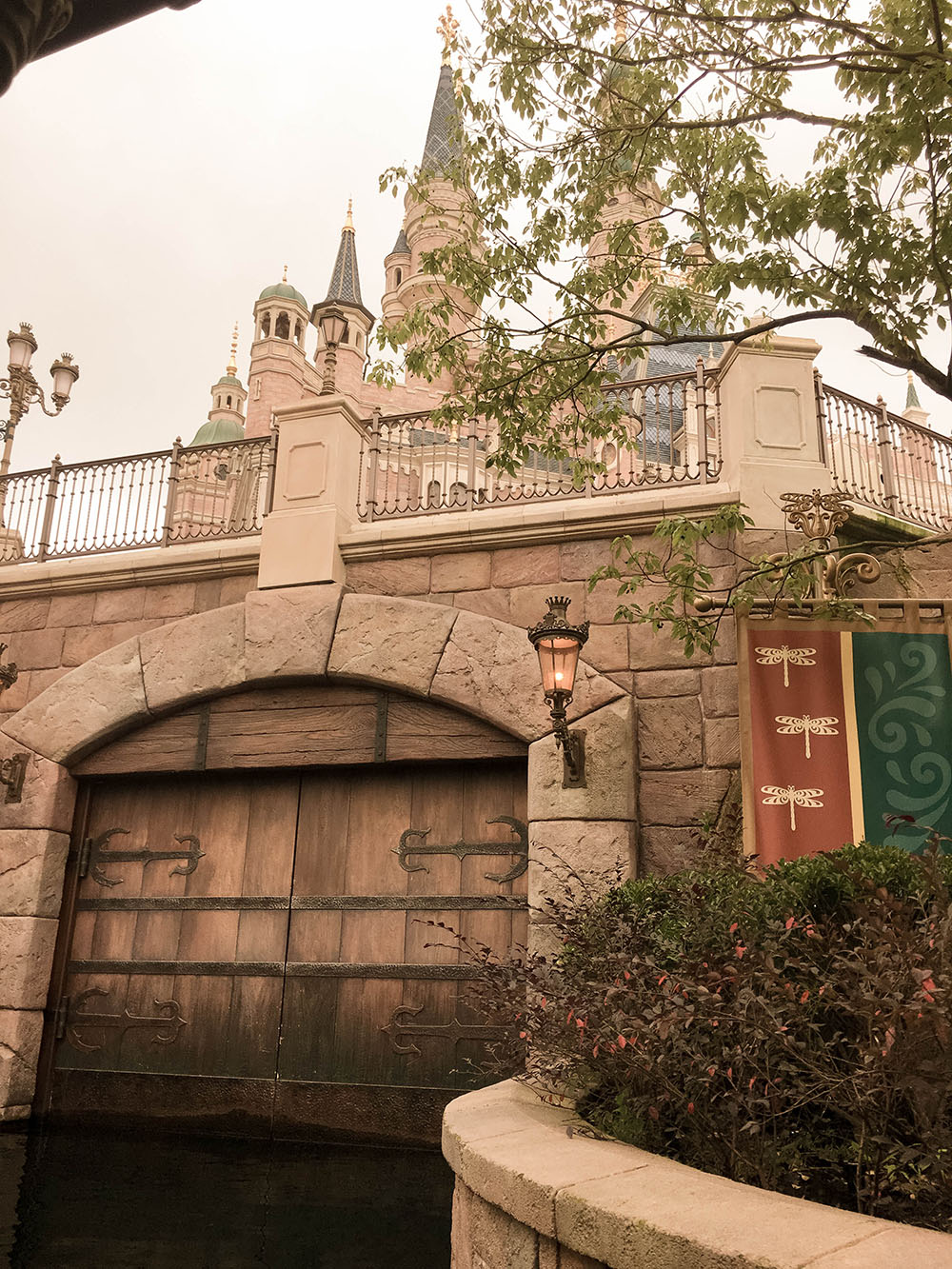 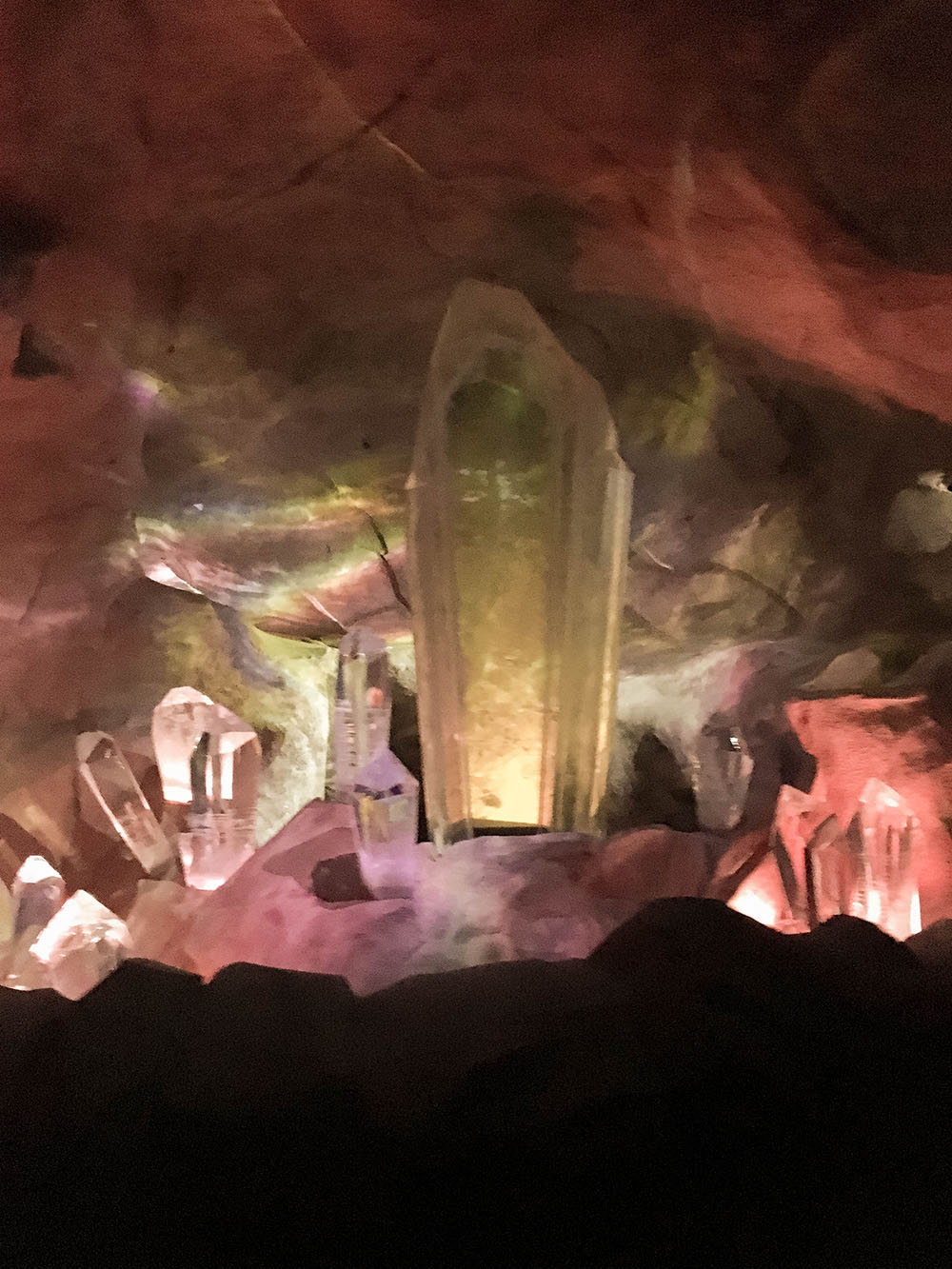 No really that’s it, you can’t say the description wasn’t accurate though, it was a crystal in a grotto. Give me the dragon under DLP over this any day though, again what a waste!

Finally we pulled up at the docks on the other side of the castle, a little underwhelmed.

It was Tron fastpass time now so off we went.

It was rather busy, but the main queue was still only 15 minutes. As it was a littler busier they had cast members controlling how many people could enter the locker area, this was a great idea as it avoided the big crush.

At this point we encountered the only teething problem of the trip. I mentioned earlier that CM really liked to triple check fast passes here, well the result was a big queue forming in front of the fastpass entrance.

This caused chaos as people assumed it was the main queue and tried to go to the front and got confused. There was still no pushing, everyone formed a line, but the “unofficial” line went right across, blocking the main entrance on the far right.

The line went down quickly but I think they need to be moving this check further down the line a little, they check it again once you reach the door anyway!

We were still in quicker than the main queues 15 minute wait so can’t complain.

As we left Tron the heavens opened. It absolutely chucked it down, full on storm this was. 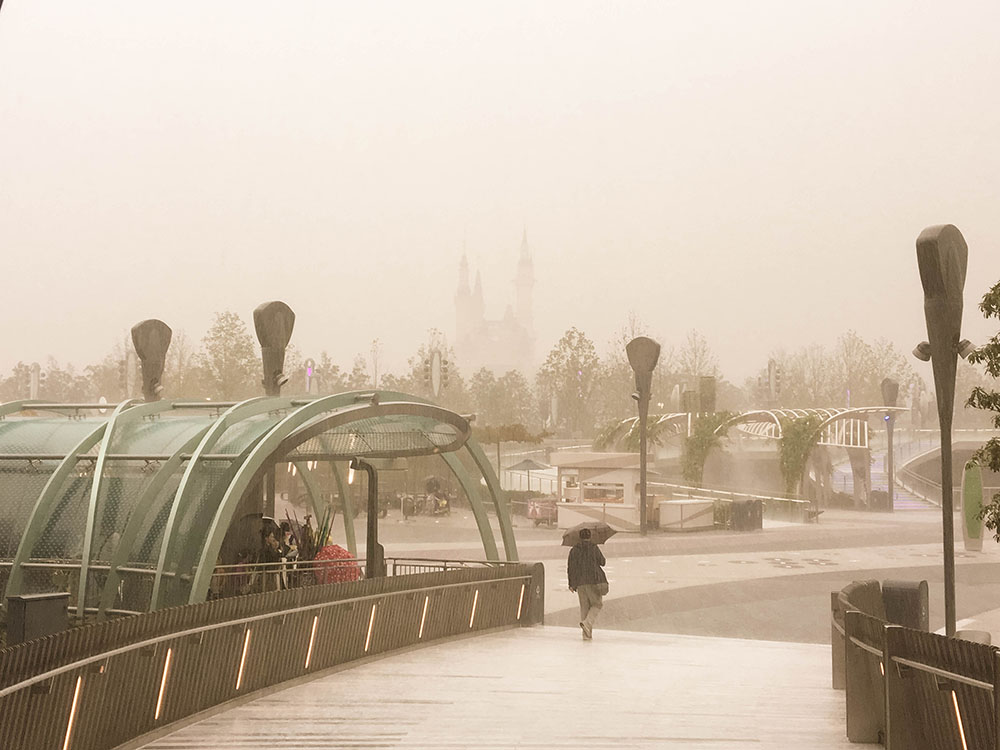 We stood under the shelter for a little while before I decided to make a dash to picked another fastpass.

BIG mistake, I got one, but when I got back I was soaked.

The starwars exhibit was just around the corner and crucially it was indoors so in a break in the rain, where it seemed marginally less heavy we made a dash for it.

This place was empty, it’s so hidden away behind buzz I’m not sure if people know it’s even there. 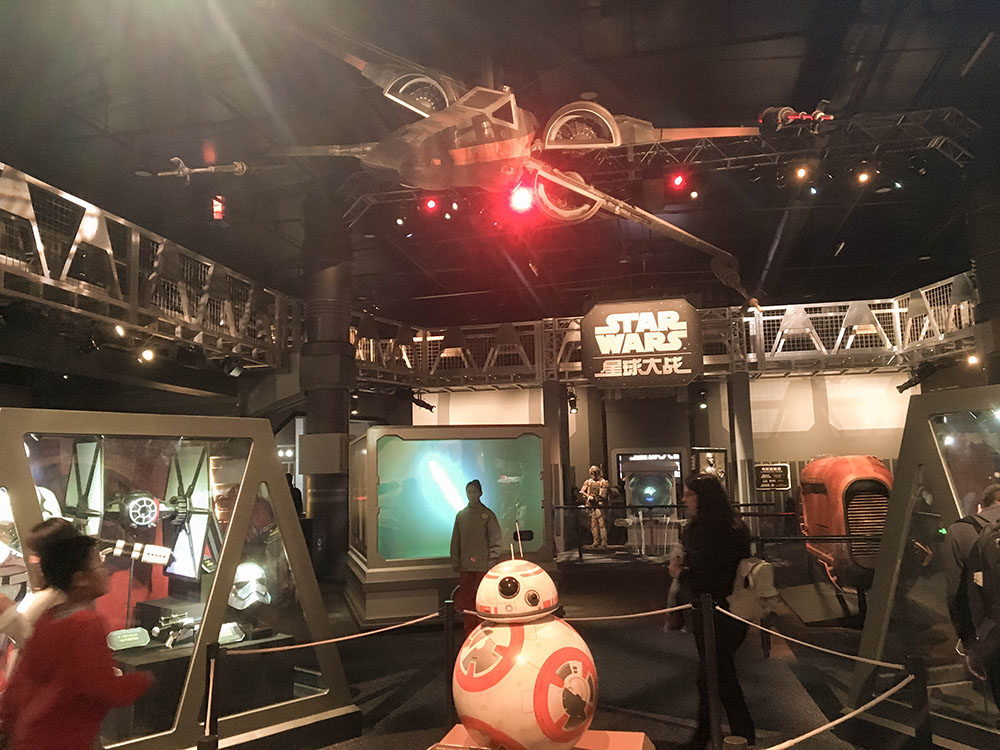 Now at this point, I had only watched up to episode 5, so most of this meant very little to me.

I did recognise the millennium falcon cockpit though so I got a soggy shot! 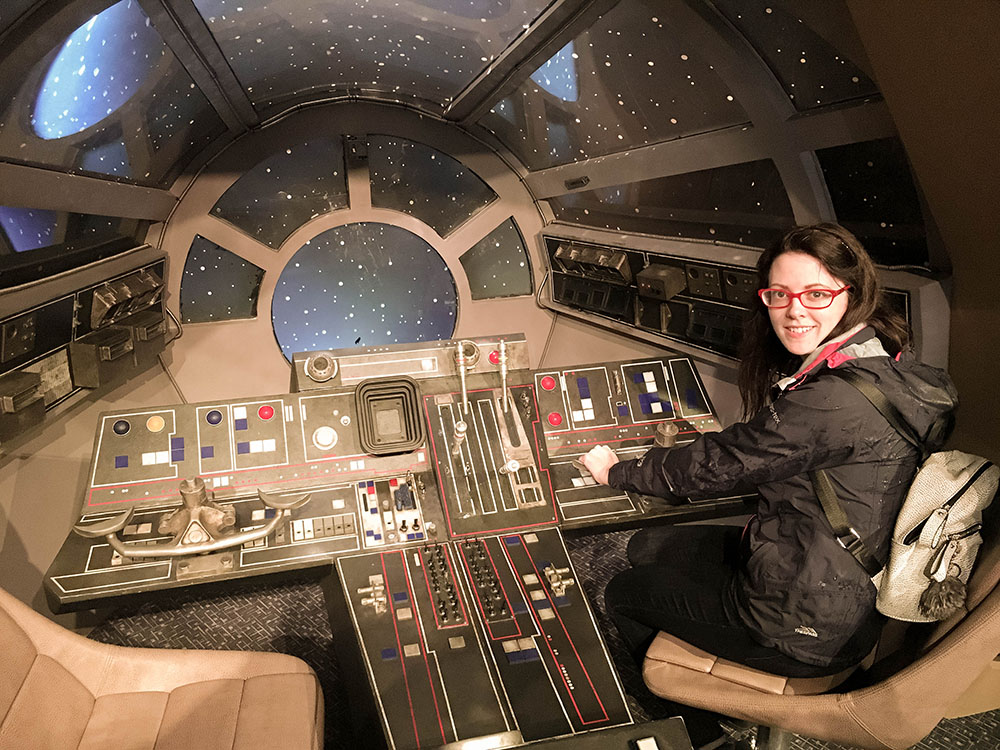 As this place is so well hidden the meet and greets were walk ups. 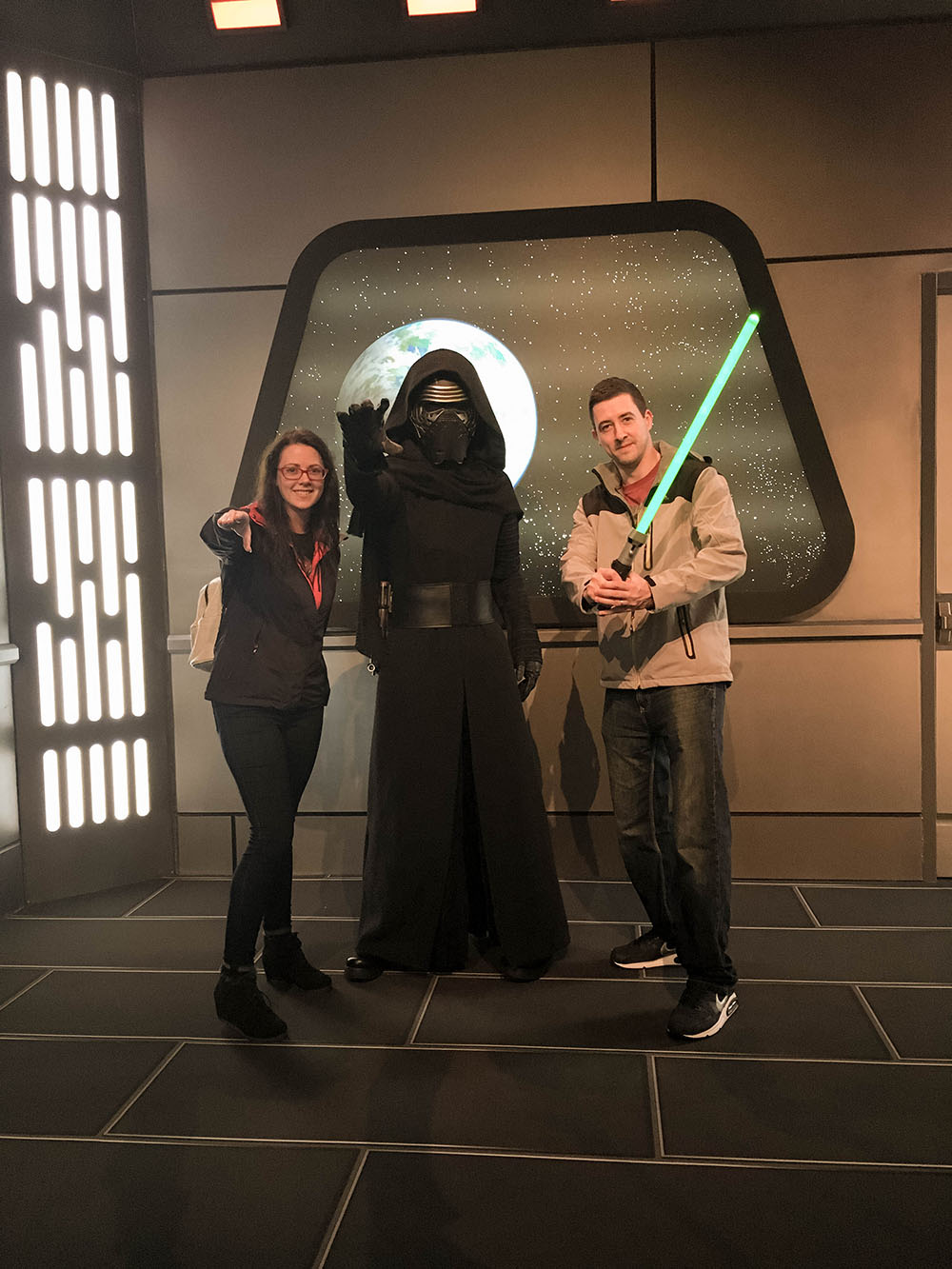 We waited around while the rain started to ease off, before running round to buzz. I liked this updated version, you can see your target and they react when hit as they are screens. We both nailed it but as usual my husband won. 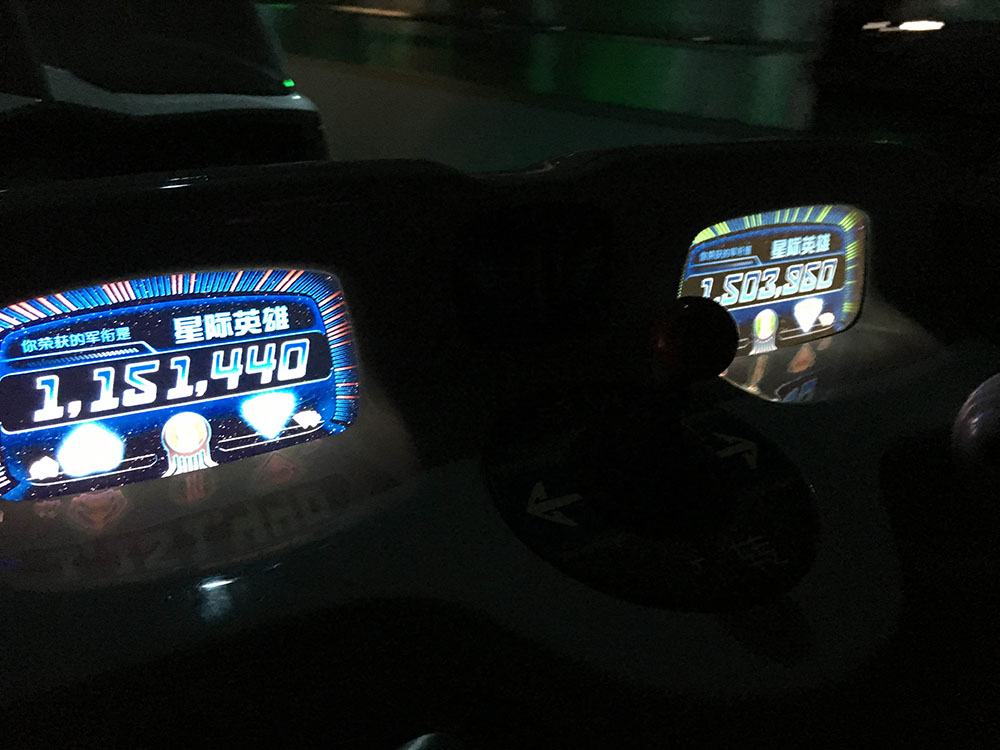 Still raining but not as heavy we headed back to Tron to use the fastpass, and also to grab another one as the time was now nearing a potential evening ride time.

Then we crossed over the park, stopping for some castle photos, not particularly good ones as it was still raining! 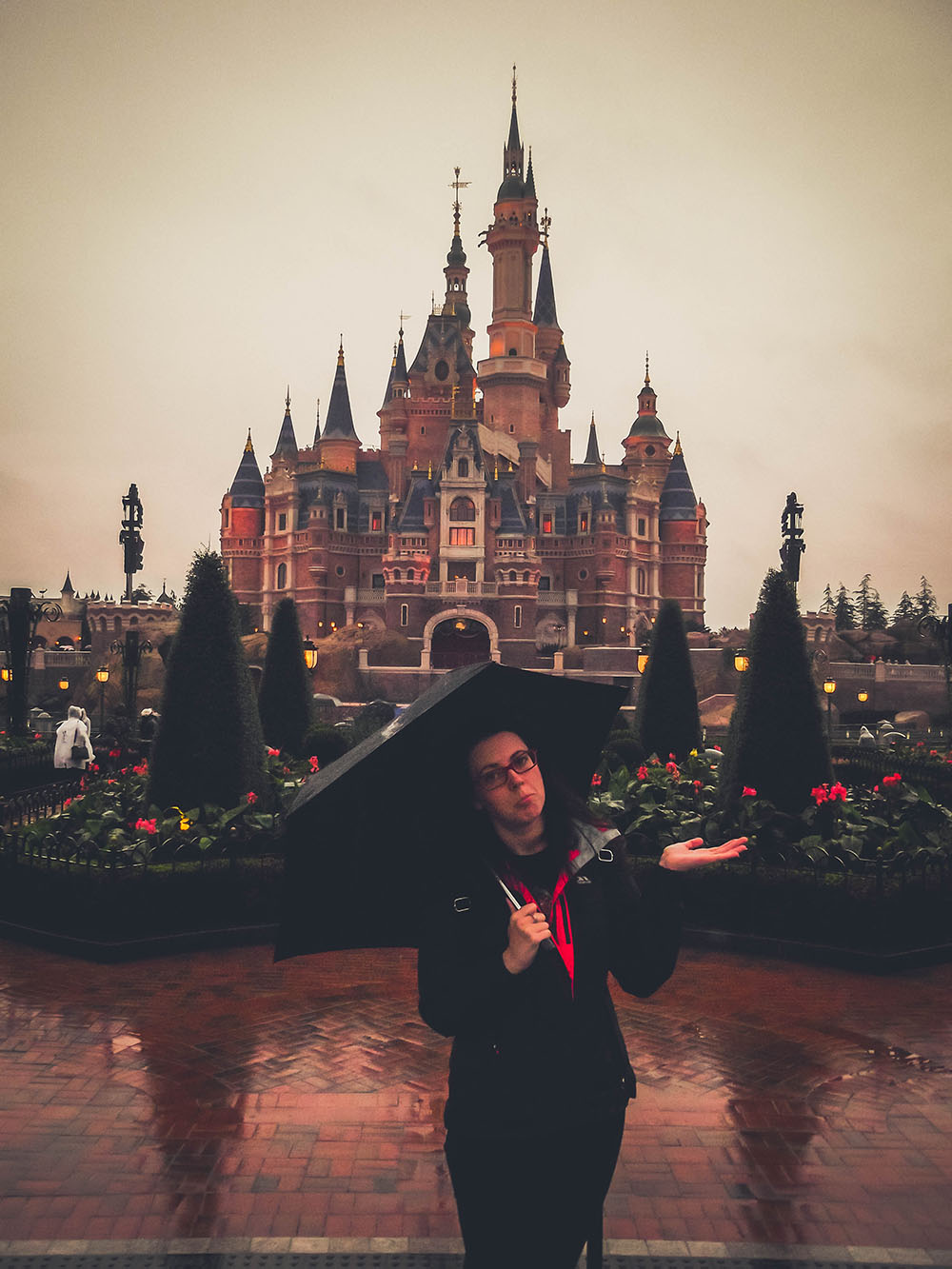 we kept out of the rain by riding pirates a few times next, each time we were still stunned as we spotted more and more details. 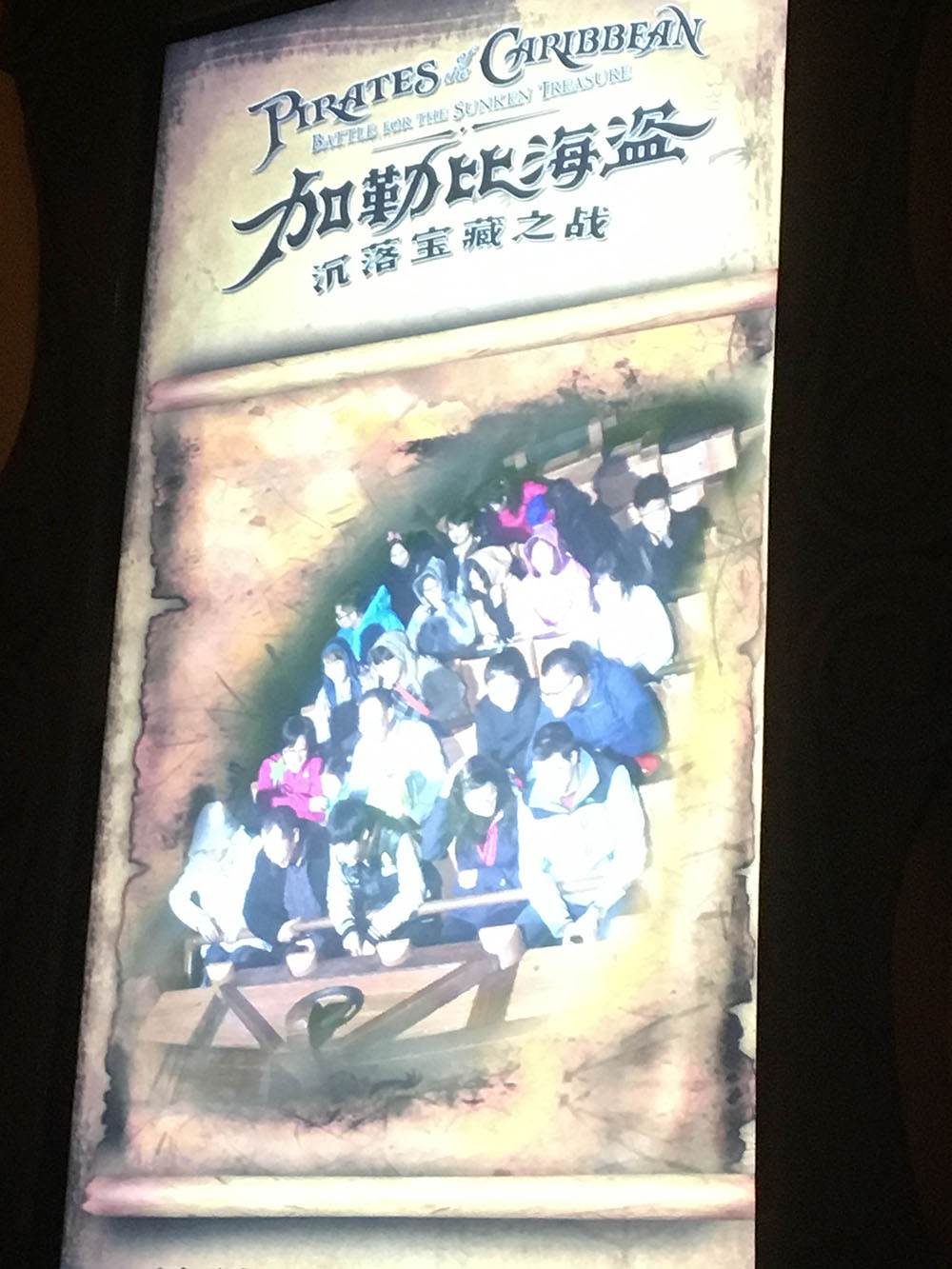 Next we headed back to Tron to use our fastpass. It still wasn’t really dark enough to appreciate it fully though as it was still dusk, so we grabbed another one for later which would work better.

We were pretty pooped now so we decided to slow the pace and explore a little around Mickey Avenue and the shops as it started to go dark. 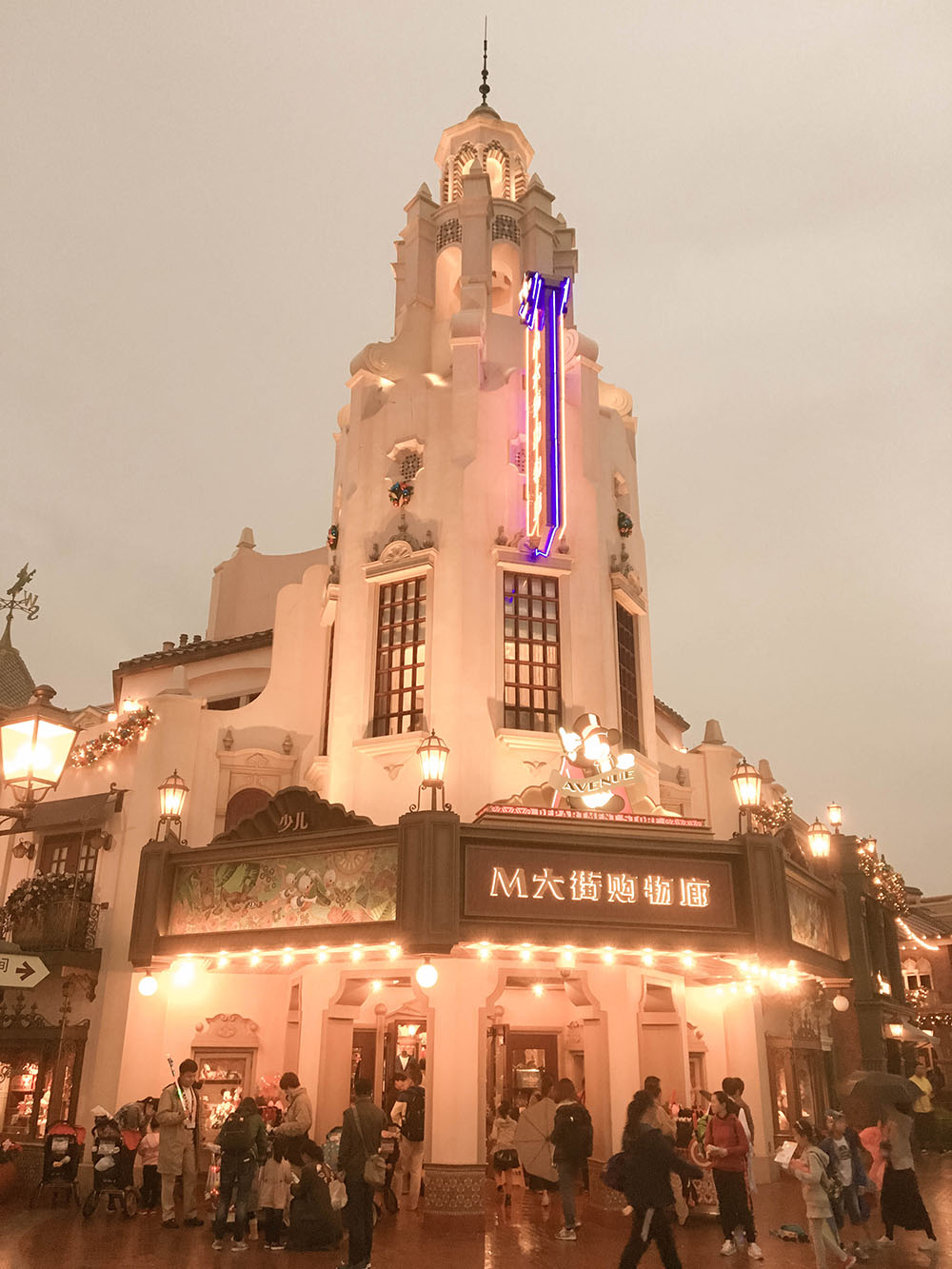 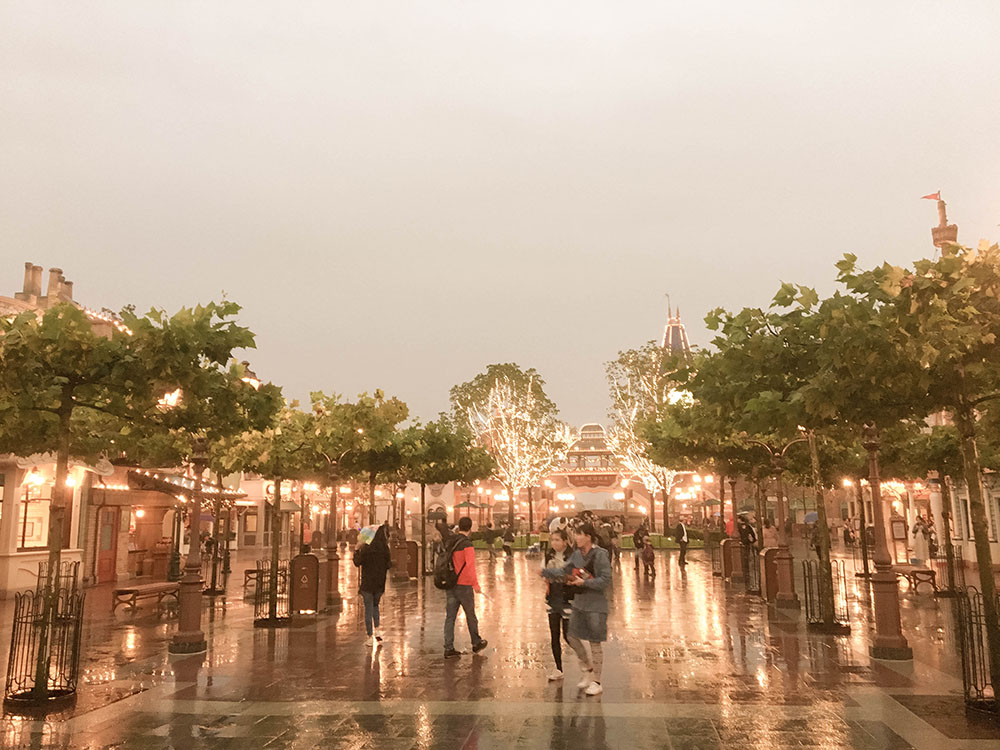 Finally the sun set and the castle lights really started to be visible.

It’s amazing how small it looks from here, and mickey avenue isn’t even that long!

I think it’s because the gardens in front are rather big, I mean the carousel and dumbo are in there! 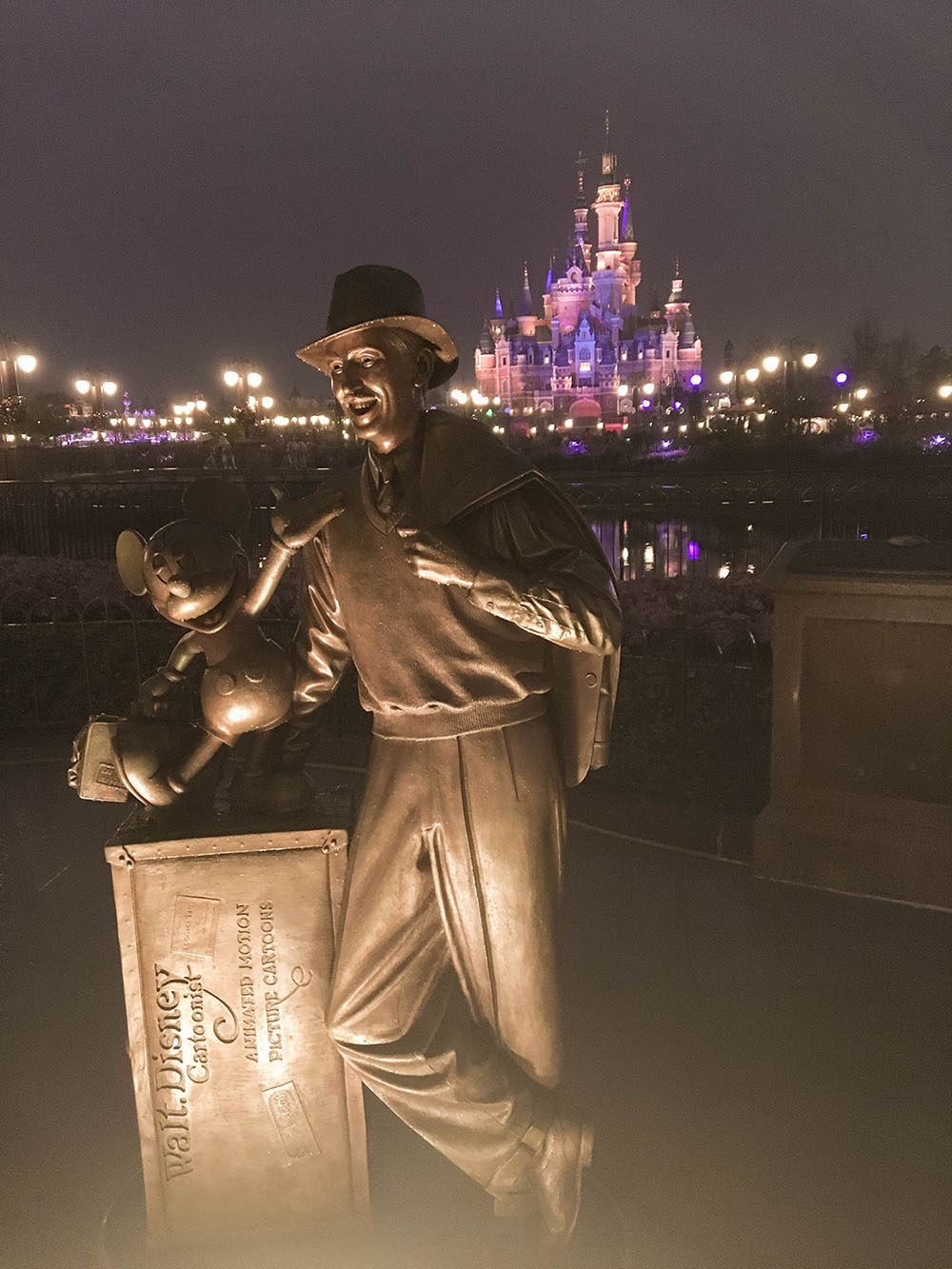 We headed towards the castle to try and scout out a good place to watch the fireworks later. 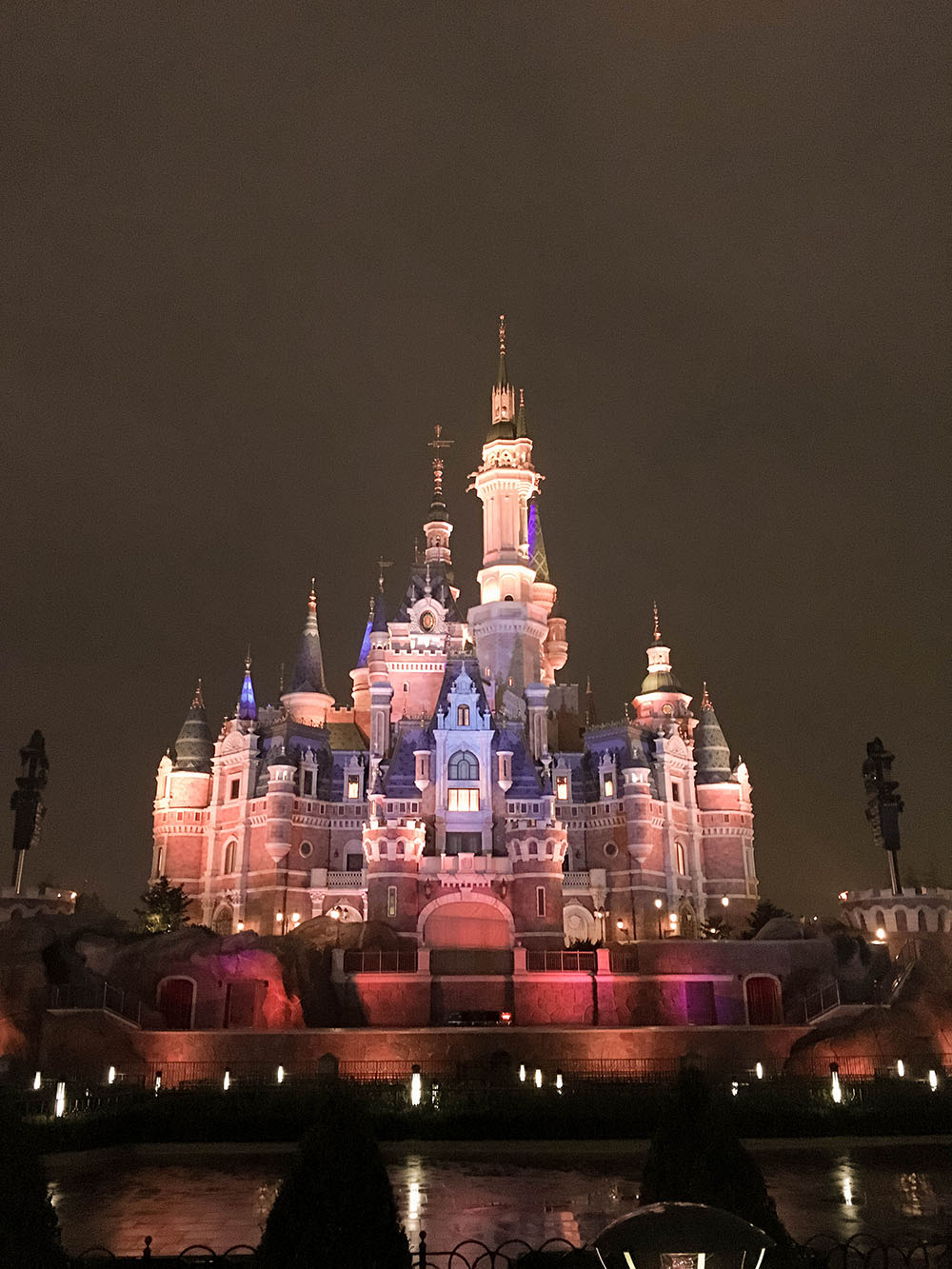